Hartpury College RFC claimed their first victory in National One after a tense affair at local rivals Cinderford.

It was a nightmare start for the visitors, who conceded a string of penalties before spilling a high kick to allow Jack Adams in for a try out wide after just five minutes.

The match quickly dropped into a lull, with plenty of commitment from both sides but little action to speak of.

Gareth Thompson got Hartpury on the board with a 40-metre penalty on 22 minutes, before a similar effort four minutes shy of the interval gave his team the lead.

Cinderford started the second period as they did the first and, following a number of phases, they worked the ball wide for Henry Bird to dive over in the corner.

But the College struck back immediately, with Thompson slicing through the home defence and passing inside for Steve Leonard to finish under the posts. Thompson added the conversion.

Hartpury dominated possession and territory for the remainder of the game as Cinderford struggled to leave their half.

They spurned a number of opportunities, but Lloyd Evans finally stretched Hartpury two scores clear nine minutes from time when he intercepted an offload close to the Cinderford try line and touched down.

And Craig Jackson added gloss to the score line in the final play as he squeezed in at the corner following a driving maul (pictured).

Hartpury would like to thank Cinderford for their excellent hospitality and look forward to welcoming them in December.

Hartpury’s next match is at home to Richmond on Saturday 20th September. 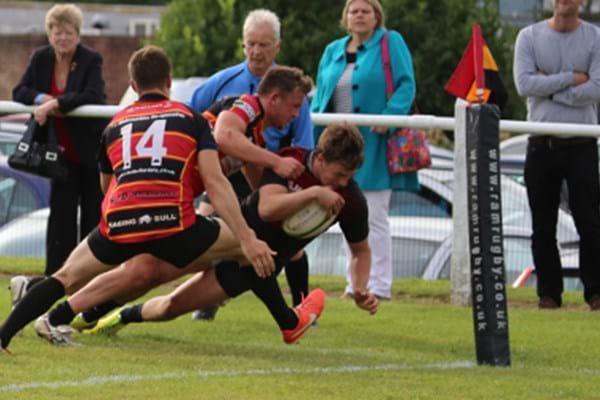