Starting a new job is always daunting, but Hartpury’s Jonathan Robinson is winning nothing but plaudits since accepting a job as First Team Performance Analyst at Swansea City Football Club.

As the Welsh side kick on with appearing in their fourth year in the Premier League, Jonathan is playing a key role in ensuring that the Swans are fully prepared for each fixture.

And the Welsh side got off to a flyer in their league campaign, shocking Manchester United with a 2-1 victory at Old Trafford, in Jonathan’s first Premier League game.

The club have grown in confidence since that result, seeing off newly promoted Burnley and West Bromwich Albion, which has seen them maintain their 100% start to the season and rise to second in the table, with Chelsea the only other team who have won their first three matches.

Jonathan spent five years at Hartpury, progressing on to a BSc Sports Coaching degree after completing his BTEC Level 3 Diploma in Performance and Excellence in Football.

Throughout his time at the college, he coached the junior football squads and eventually became assistant coach to the junior first team, where he played a key part alongside Hartpury’s junior football coach Paul Tassell in securing numerous titles for the successful football programme.

He even created the Analysis department of the football programme from scratch, analysing each game and providing each player with a breakdown of their performance. Now he is doing the same for stars like Ivory Coast striker Wilfried Bony as the Swans look to build upon another solid season and push on from their 12th place finish in the previous campaign.

Jonathan, 21, said: “My role involves analysing the players’ training sessions and upcoming opponents to make sure that the squad have all the information they need to help them secure a positive result.

“Everything that I studied and the experience I gained at Hartpury has helped me get to where I am now. It was a massive part of my development, and without it, I wouldn’t have secured this fantastic opportunity.”

“I was really excited to begin working for Swansea and it has been a great start by the team. I’m hoping we can carry this form on and have a good first season with the team.”

Paul said: “Jon was absolutely fantastic throughout his time at the college and he was a real asset for our football programme here.

“He worked hard in every single aspect of football, whether that was coaching the lads or analysing each player’s performance from the previous game. He was a vital component in the success that the junior programme has enjoyed here at Hartpury, and I am extremely proud that he has managed to secure this role with Swansea City.” 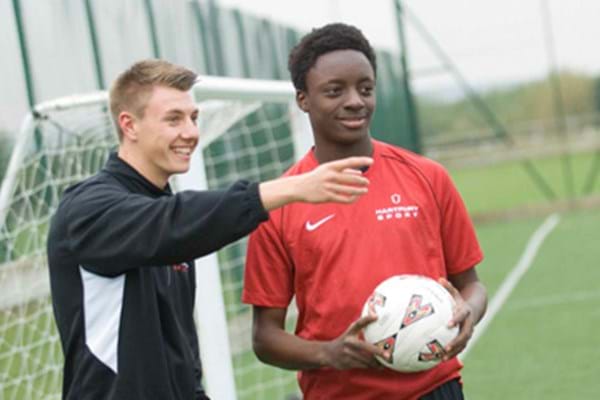