Sebastian Negri certainly isn’t the first talented young rugby player to follow in his big brother’s footsteps, but not many also have their older sibling as their sports agent.

And it’s no wonder that his brother, Thomas, has sold Hartpury to him as the ideal environment in which to further his rugby and business acumen; he sowed the seeds for his own dream career there.

Second row or back row Negri is one of two new South African signings who will bolster Hartpury’s forward ranks this season, with back row Joe Miller also coming on board. Both are studying for a degree in Sports Business Management as well as playing for Hartpury’s university and RFC teams.

Although originally from Zimbabwe, Sebastian will have international commitments with Italy Under-20s to fit into his packed schedule. The 20-year-old has an Italian father and hence, an Italian passport.

A product of Hilton College, near Durban, having been awarded a sports scholarship there, he went on win a contract with Western Province Academy, playing every game for their Under-19s, including in the Currie Cup.

That earned him a call-up to Italy Under-20s for the Junior World Trophy in Chile – a tournament they won to earn their place at the Under-20s World Cup. Moving up to Western Province Under-21s and playing every game for his country in the Under-20s Six Nations, Negri was ready for his World Cup dream to come true but it was not to be.

“I picked up a knee injury when I went back to Western Province after the Six Nations, only a week before the World Cup in New Zealand having been named in the squad,” he said.

“It was by far the biggest disappointment of my rugby career so far, but going through those four or five months of rehab, it did make me think about life after rugby.
“It only takes a serious injury for it all to be over, so I want to make sure I get a good education as well as pushing on in my rugby career. I knew from my brother that Hartpury is the best place to do that.”

Having graduated in 2012 with a BA (Hons) Sports Business Management, Thomas, 24, has now returned to South Africa, where he is a successful sports agent and his younger sibling is amongst his clients.

Sebastian added: “Tom spoke to the coaches here and helped me with all the paperwork. I know it’s the best place for me to be to get a good degree and give myself the best possible chance of securing a professional rugby contract.

“With Hartpury RFC having been promoted to National League One, I felt that would be a great opportunity for me. And if things don’t work out with my rugby, I know I’ll have the qualifications, the skills, experience and contacts I need to build a good career, like my brother has done.

“I’m loving it here so far. The coaching and facilities are fantastic and I’ve made loads of friends already. There’s a real sense of community and family.”

Joe, who is also 20, attended and played for arguably the strongest rugby-playing school in Cape Town - Bishop’s College - where he was first XV captain. He then moved on to the same Western Province academy squad as Sebastian, but an injury – a groin and hip reconstruction kept him out for seven to eight months – limited his opportunities.

Now he’s arrived at Hartpury, having been encouraged to come to the college by his friend and former Hartpury student Dylan Rodriguez, and he’s ready to push for a place in the BUCS and RFC squads.

“It’s wonderful here and I can see it will be the perfect place to give me a bright future – both in terms of my rugby and my education,” said Joe.

“My ambition is to become a sports agent, and the quality of the Sports Business Management programme at Hartpury was a big factor in my decision to come here.

“But the coaching is brilliant too; I’m enjoying the drills and there’s a really effective structure in place. Having a club side and a BUCs side increases the opportunities available to students.”

The South African duo are not the only exciting new signings to have swelled the Hartpury RFC ranks recently. England Sevens and England Students star Ruaridh McConnochie, 22, will bolster the back division, with the full-back or winger having joined from Nuneaton RFC. 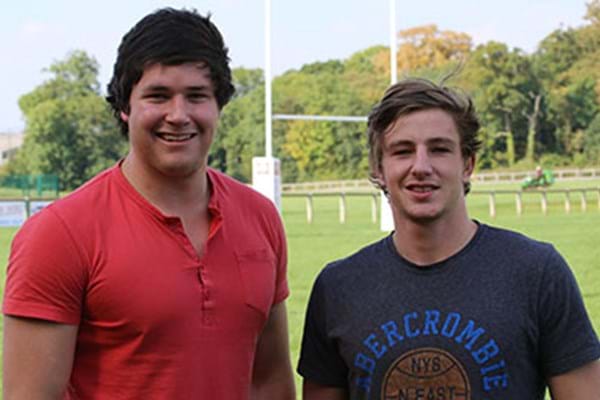