Hartpury’s footballing hotbed continues to go from strength to strength with Cheltenham Town’s apprentices now training and developing at the college under the watchful eye of a former Robins’ captain.

Fans’ favourite Shane Duff, who made more than 200 appearances for the club over a 10-year period, completed his Sports Coaching degree at Hartpury and has since progressed to become a sport lecturer at the college, combining this with his new role as lead tutor for the Cheltenham youngsters.

The 16 apprentices will be under Duff’s tutelage as they complete a BTEC Diploma in Sport at Hartpury. The scheme is designed to provide the budding footballers with an education while they look to make it into football’s professional ranks.

Duff played a key role in Cheltenham’s rise up the football league ladder, which culminated in promotion to League One in 2006. The commanding centre half left the Robins to join Bradford City in 2010, but he was forced into early retirement at the age of 29 due to a spinal problem.

Since then, Duff, now 32, has worked hard at carving out a second career in the football and education industry. He began studying at Hartpury in 2011, and immediately started using his professional expertise to assist with preparation and training for the senior football programme.

Shane said: “It was a completely new experience for me when I started studying at Hartpury. I finished my degree with first class honours and throughout my time here, I thought how great it would be to work in a place that combines sport and education so effectively.

“The link with Cheltenham, which is developing all the time, is something which I am hoping to play a major role in. It’s beneficial to both the football club and the college.

“Hopefully the young lads we have here as apprentices can draw on my experiences as a footballer and an individual and use that to help them on their own footballing journeys.”

The current crop of apprentices have been joined at Hartpury by Robins’ first team captain Matt Taylor, who is studying a Masters degree in Coaching Science and assisting senior football manager, Marc Richards.

He said: “I played England Universities football with Marc so we had a catch-up when I moved down to Cheltenham. He mentioned the football programme was looking for a graduate assistant which involved doing a Masters.

“It's the perfect opportunity to gain valuable coaching experience, continue my studies and to work in a football programme which is as close as you can get to being a professional outfit.”

Centre half Taylor, who joined from League One outfit Bradford City in the summer, has made an impressive start to his Cheltenham career, playing a leading role in his side’s positive start.

He will be doing his Masters over two years as he combines his studies with his Cheltenham career. Taylor’s role at Hartpury will see him coaching one of the three senior football squads throughout the week and then managing the team throughout their league campaign this year. He knows this experience is vital to prepare him for life after football.

He said: “I’ll be 34 when the Masters is completed so, all being well, I will still be able to play football for a couple more years, and then I’ll look at my next steps for a career after football.

“I am currently taking the UEFA B coaching course, which I’ll hopefully complete in the next couple of months. The UEFA A license is the next step and I want to get as much coaching experience as I can while working at Hartpury.

“There are some excellent young footballers in the programme so our job is to develop these players so they fulfil their potential.”

Tom Radcliffe, Hartpury’s Director of Football, said: “It’s great that we have been able to establish such a strong link with Cheltenham Town and we are glad that we will be playing a part in honing these young players’ skills and helping them develop as individuals as well as footballers.

“Shane has been a fantastic ambassador during his time here, and his success is a testament to his hard work and determination. He is the perfect role model for all aspiring footballers, and I am sure he will have a positive effect on the apprentices.

“It’s great that Matt is studying a Masters here and we’re delighted he has been so willing to get involved in the senior football programme – it’s a win-win situation for everyone.” 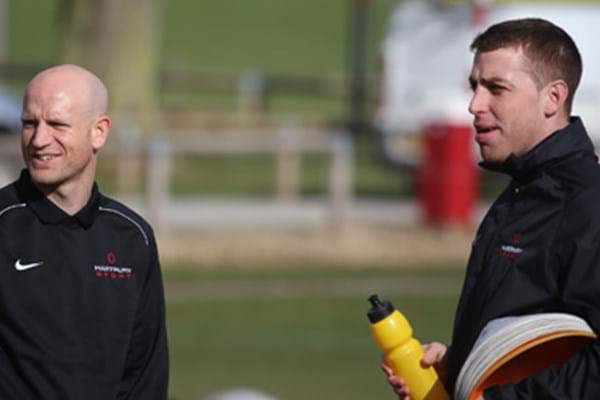