Tough conditions and a lost oar prevented a unique Gloucester-Hartpury crew from showing their full potential as the crew of varying age-group internationals still managed to claim a bronze medal at the British Rowing Senior Championships.

This was the first time the senior rowers had the opportunity to partner the most exciting talent now coming out of the Gloucester-Hartpury club.

Tom Pattichis, Hartpury’s rowing coach, said: “In a field made up of the country’s top rowers, including the GB senior team – who went on to win the event, finishing third is a remarkable achievement for a team only rowing together at competition level for the first time. It was great to see former and current Gloucester-Hartpury rowers together and performing well in difficult conditions.”

Promise was also shown by a crew made up of current Hartpury students. A-level students Frances Russell, Sophia Heather and Alice Bowyer and BTEC Diploma Sports Coaching student Frances Ford teamed up to finish as the highest ranking Under-19s crew in the same event. Their time was enough to crown them national Under-19s women’s quadruple scull champions.

Pickles and Bowyer were then pipped into second by last year’s main rivals, Marlow Rowing Club, in an Under-19s double scull.

Pattichis added: “There were some very encouraging results across the board, especially considering it is so early in the season.” 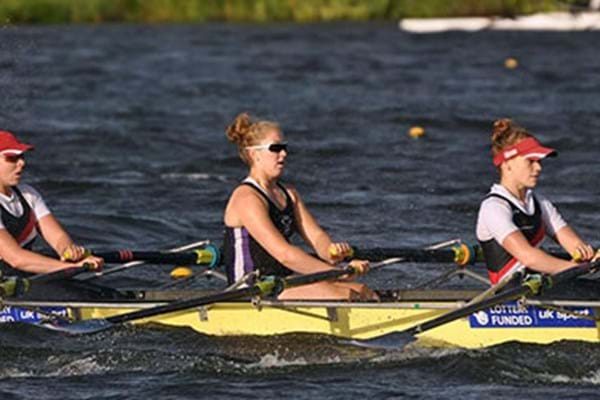