This game was a cracker, although any Hartpury followers with a heart condition will have been relieved when referee Lewis blew his whistle for the final time.

Both sides contributed well, with a mixture of exciting attacking play and frequent errors. The final count of seven tries shared and only two shots at goal, both missed, tells its own story.

This was Hartpury’s first visit to the impressive Northern Echo Arena and they were quickly on the back foot. With only three minutes gone, the visiting defence was stretched beyond breaking and Park full-back Henry Robinson was in for the try, converted by Garry Law.

Hartpury took this set-back in their stride and proceeded to dominate possession and territory for much of the first half. The forwards carried well, with Bartle and Merrey prominent, and it was a drive by Ludlow, deep into the Park defence, that got them smartly back on terms.

The England Under-20 forward was stopped on the 22, but quick ball allowed lock forward Rob Fuller to show both pace and strength to finish next to the posts with defenders hanging off him.

Early into the second quarter, Hartpury were ahead after a line-out was won 25 metres out. The catch and drive has long been productive for Hartpury, but rarely does it result in a try from such distance.

However, in a display of power and control, the visitors drove all the way to score, with flanker Callum Bowden getting the final touch. Mitch Burton’s conversion from wide out was good.

Apart from the occasional Park foray, including a big break off a scrum by Number 8 Hodgson, the visitors controlled the remainder of the first half without showing the cutting edge necessary to improve their 14-7 lead.

DMP were re-energised after the break and much of the third quarter saw them pounding at the Hartpury defence. With 54 minutes showing they appeared to lose the ball forward on the line, but after consultation among the officials the try was awarded to Robinson, who had pounced on the loose ball. Law levelled matters with the kick.

Hartpury’s response was make changes and replacement flanker Dan Thomas was on hand to restore the lead after 68 minutes. Good hands from Jackson and Griffiths released Batley, who made a typically forthright charge down the left touchline. Although he was dragged down metres short, Thomas was on hand to crash over from Ellis’s popped pass. Another replacement, Thompson, kicked the extras.

Typically, Park were soon back on terms when Rob Conquest was able to dive into the corner after DMP launched an effective catch and drive of their own. Law somehow made the conversion from the touchline and it was 21-21.

At this stage either side could have snatched it. With the clock ticking down, Park knocked on and, from the resulting scrum, centre Tom Griffiths beat his man in midfield and set off towards the DMP posts. Although the cover was there, he was able to ship the ball to Craig Jackson whose smart pass put Steph Reynolds under the posts for the bonus point and the win (pictured).

There was still time for Park to spend the final two, nail-biting minutes hammering at the Hartpury defence, but there was no further scoring before the welcome final whistle.

Next week Hartpury seek to address their home form as Tynedale make the long trip down from Northumberland. 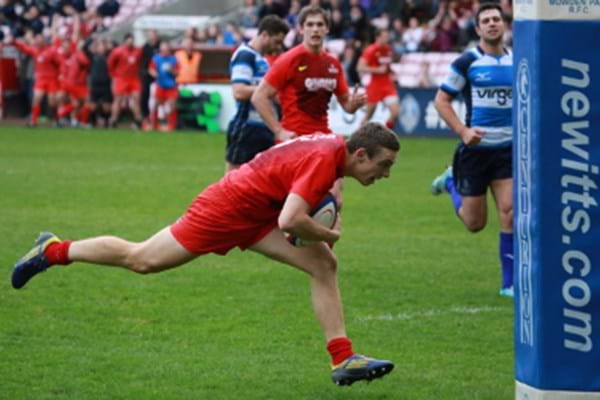