After securing top spot in the AASE North League last week with a win at Oaklands College, Hartpury College Under-18s defended their unbeaten record with a convincing 68-7 home win over Worcester 6th Form College in the final round of league fixtures.

The hosts got off to a flying start. After several phases, second row Alex Craig found himself on the wing and some neat footwork from the second row helped him cross in the corner to open the scoring. Full-back Robbie Faulkner converted.

Moments later, a powerful 60-metre solo effort from number eight Morgan Morris saw him shrug off several defenders after a turnover at scrum time to double the score, with Faulkner converting from out wide.

The Hartpury blitz continued with another try following fine interplay seeing Hartpury race into a 19-0 lead before a set piece score off a driving line-out wrapped up the bonus point on the 20-minute mark, Morris providing the finishing touch to complete his brace. Faulkner added the extras from the touchline.

Morris thought he was in for a first-half hat trick, breaking down the flank in identical fashion to his first score, but he was brought down just short. In support was his back row buddy Sid Blackmore to dot down. Another touchline conversion from Faulkner made the half-time score 33-0.

Straight from the restart, Craig broke clear from his own 22 to feed back row Zac Xiourouppa to score by the posts, Faulkner converting.

Next on the scoresheet for Hartpury was hooker Jordan Liney, finishing off a superb team effort. A practiced set-play fresh from the training paddock was executed accurately to allow Faulkner to flash back blind, breaking down the touchline before passing inside to Liney to score.

Xiourouppa added a second after a Worcester fumble on their own line before Faulkner cut through the defence to score, converting his own score to take the score to 59-0.

In reply, Worcester conjured up a try of their own, with their fly-half finding a gap to score after putting pressure on the Hartpury line. It was Hartpury who scored the final try, Craig grabbing his second after strong ball retention from the pack in the closing stages.

Captain Sid Blackmore was delighted with his side’s performance. He said: “I’m chuffed for the boys to finish the league unbeaten. We know there are areas of our game that we need to work on. We are going to train as a team over the Christmas break so that we ready for the knockout stages of the competition.” 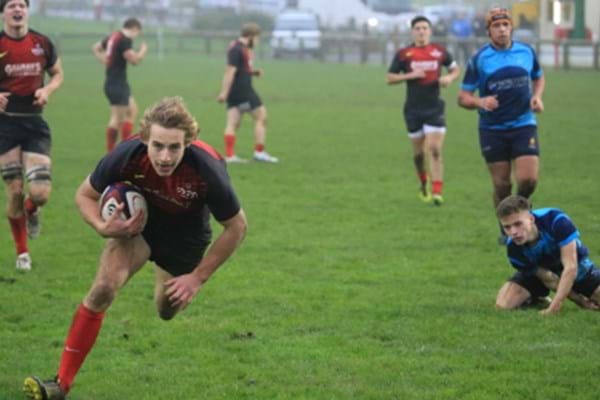