The USA Eagles have soared into Hartpury in preparation for Saturday’s clash with Tonga at Kingsholm.

Fresh from a 27-17 victory over Romania in Bucharest in the opening fixture of their European tour on Saturday, the Eagles arrived in Gloucestershire yesterday and will be using Hartpury as their training base all this week.

Mike Tolkin’s men are familiarising themselves with the facilities and the area ahead of next year’s Rugby World Cup, when Hartpury will be their official ‘Team Base’ during the tournament. They will play Japan in a Rugby World Cup Pool B match at Kingsholm on October 11th, 2015.

Earlier today, Hartpury students on BTEC Diploma Sports courses braved the rain to watch the USA team train and, following the session, the USA coaches headed off for a Q and A with Sports Coaching degree students and staff. The team and students also observed a two-minute silence to mark Armistice Day.

USA head coach, Mike Tolkin, said: “The facilities here are top-rate. I’d heard about Hartpury and the players coming through here from some top rugby people and now we’ve arrived, I can see the reasons for that success. Other than the weather, everything’s great!

“The squad are in good spirits and preparations for the Tonga game are going well – the win in Romania helped. Everyone is looking forward to playing at Kingsholm on Saturday. For the American guys, particularly those who are domestically based, coming into a proper rugby stadium like Kingsholm just builds the excitement ahead of the game.

“It’s good to be getting a taste of what our life will be like during the Rugby World Cup next year too. That familiarisation is really important; making connections with local people and places.”

The USA qualified for next year’s Rugby World Cup with a tense second leg 32-13 victory over Uruguay in March, having drawn the first leg in Montevideo 27-27. In the second leg, they went into half-time 13-3 adrift but hit back to score 29 unanswered second-half points in front of a vocal home crowd.

That win handed them a spot in pool B, where they will face South Africa, Samoa, Japan and Scotland, who are also using Hartpury as an official ‘Team Base’ for the tournament next Autumn.

Apart from 1995, the Eagles have participated at every Rugby World Cup since the inaugural tournament in 1987. The Eagles’ captain and prolific try-scorer, Todd Clever, has been arguably their most influential player for more than a decade and the flanker captained his country at the RWC 2011.

He said: “Coming here yesterday after a long day of travelling, we didn’t have any idea where we were but seeing all the student athletes and the high performance environment at Hartpury – from the facilities to the coaches and the pitches – it’s really impressive. We’ve been welcomed with open arms and we’re happy to be here.

“Rugby is the fastest growing team sport in the US from school to High School and university. As it becomes a varsity programme and gets more backing and acknowledgement, it is really going to take off. A lot of High Schools and universities across the country are really getting behind the sport and the result should be a better feeder system into the national team.

“That awareness and growth will get an even bigger boost from our involvement in the Rugby World Cup but right now, the team are focused on the task in hand, starting with Tonga on Saturday. We’ve got a lot of young guys in the squad getting their first starts on their first tour and it’s really important to lay the foundations right.

“We’ve heard some great things about Kingsholm and we’re looking forward to playing there. We’ll hopefully win over some new fans and play a brand of rugby that will get people behind us for the game and, more importantly, the Rugby World Cup next year.”

Hartpury Principal, Russell Marchant, said: “We’re delighted to have the USA team here preparing for their game against Tonga and we look forward to welcoming them back for next year’s Rugby World Cup.

“It’s a fantastic opportunity for our students to see an elite national rugby team in training right on their doorstep; and for our coaching staff and students, the exchange of knowledge is invaluable. It certainly helps build the excitement ahead of us hosting the USA and Scotland for the World Cup next year!” 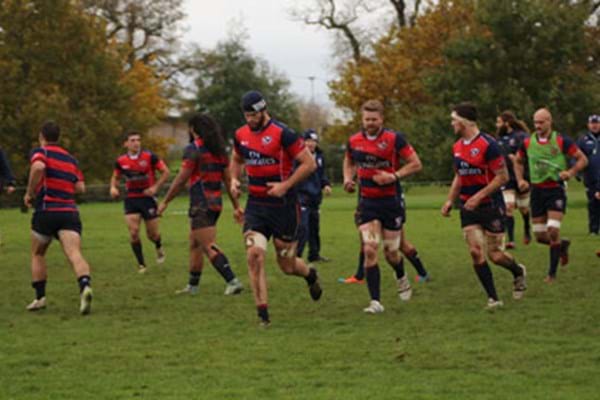