Following a run of outstanding away form and the recent convincing home win over Tynedale, Hartpury finally came undone at the hands of a well drilled and hungry Ealing Trailfinders in National One.

Hartpury were missing the input of second row Batley and flanker Thomas, who had been called up for Cherry and White duty down at Sandy Park and tough midweek BUCS fixtures had also taken a toll on the college side ahead of the game at unbeaten table leaders Ealing.

Despite all this, it was a day of mixed emotion as Hartpury showed great strength and depth of play in the first half of the game, only for the opposition to pick it to pieces in the second.

It truly was a game of cat and mouse for the first half, with both teams up and down the pitch relentlessly and strong defensive efforts required at either try line.

Hartpury drew first blood with a darting try from Ben Ellis as he emerged from the back of the scrum and found himself in just enough space to apply the gas and storm through the Ealing defence.

Burton added the extras with a neat slot between the posts aided by the afternoon’s stiff breeze.

This seemed to unsteady the hosts and for a good 20 minutes and thereafter the score line remained Hartpury seven points to the good.

It certainly wasn’t without effort to hold that score as Hartpury’s defence was forced to keep Ealing just yards from touching down for a period of play that lasted no longer than five minutes but seemed like an eternity as the ball was juggled back and forth across the face of the Hartpury line.

Unfortunately for the visitors the try came and slowly but surely, Ealing ramped up the pressure and managed to eke out a half time score of 17-10 with Hartpury’s additional points coming from a Burton penalty.

Hartpury suffered the loss of Mitch Burton just before half time after a crushing tackle left him with injured ribs and unable to continue, his replacement Gareth Thompson who took over the kicking duties, slotted the extras from Hartpury’s solitary try of the second half. A blistering 55-metre dash from Steph Reynolds who left the opposition scratching their heads.

Sadly for the visitors, the Reynolds try was to be the highlight of the second half, where a combination of poor lineouts and again some discipline issues that need addressing (although much improved on recent games), started to unpick a solid first half performance.

A new found vigour from an Ealing side determined to keep their unbeaten record so far this season, showed through and the tries rained down leaving Hartpury with no response to the attack. Five tries in the second half sewed up the bonus point and despite some wayward kicking, the final score was convincing in Ealing’s favour.

Up next for Hartpury is a home game against fourth placed Coventry, where they will look to seize the advantage of the strident home crowd and show more of the flair that allowed them to punish Tynedale by eight tries just a week ago. 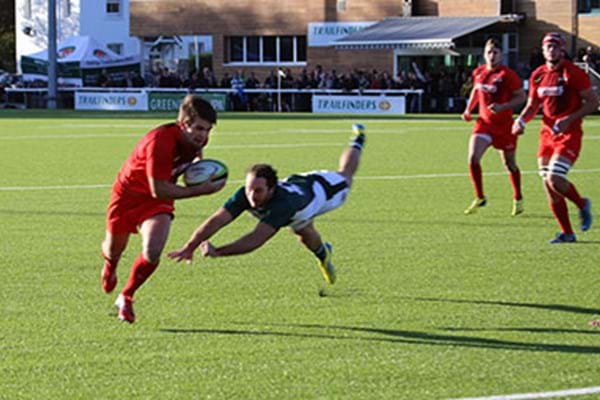