Hartpury is playing a leading role in an initiative to grow the game of Futsal in Gloucestershire.

Funding has been secured from the FA to help deliver a new project that will see girls Futsal leagues from Under-eights through to Under-16s start in Gloucestershire in January 2015.

Hartpury is a key partner in the delivery of the project, using part of the £3,400 funding to raise awareness and increase participation in Futsal.

Hartpury students will be at the forefront of the new initiative. With Hartpury hosting all of the Under-16s girls coaching sessions and games, they will help run the league and be involved with coaching and refereeing opportunities.

They will also benefit from funding towards achieving their Futsal Level One coaching qualification and could potentially support local teams and schools through work placements.

The students have already helped run an introductory session for coaches at Hartpury, which provided an introduction to Futsal and a taster session for community coaches. Students were also able to share their Futsal experiences with club coaches when they attended their FA Futsal Level One course.

Hartpury Sport Senior Lecturer Luciana De Martin Silva will be co-ordinating the delivery of the Under-16s Futsal League, having led a Hartpury Women’s Futsal team to the semi-final stages of the FA Cup last season. The league will have eight teams with around 90 girls competing at Hartpury.

Luciana said: “The FA and the Gloucester Girls’ League were very keen to get us on board and we’re really proud to be an official partner in delivering the project.

“We are very enthusiastic about the opportunities this new project will make possible, including creating an environment in which students and local coaches can develop their knowledge of the sport and Futsal coaching skills, as well as increasing girls’ participation in this exciting sport, which is rapidly growing in the UK.”

Futsal is much like regular football but it is played on a smaller ‘field’ and mainly indoors on a hard court surface. It was developed in Brazil and Uruguay in the 1930s and 1940s and is now growing in popularity in the UK.

It is played between two teams of five players each, one of whom is the goalkeeper. Unlimited substitutions are permitted. It is also played with a smaller ball with less bounce than a regular football due to the surface of the pitch. 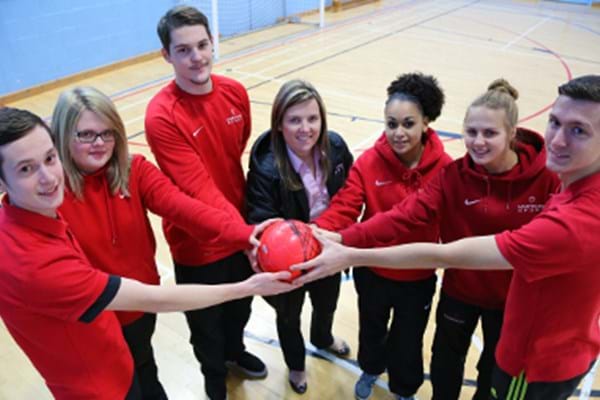