Hartpury featured heavily at the Gloucestershire Media Sport Awards as seven individuals with ties to the college picked up prizes at last night’s star-studded event.

Parker, on loan at Gloucester City from parent club Newport County, picked up the over 16 Footballer of the Year award. The Hartpury graduate helped himself to an FA Cup hat-trick and player of the round award as well as signing his first professional contract for Newport over the past year. He also scored the winner in Hartpury’s dramatic English Colleges FA National Championship final.

Junior team of the year was scooped by the Gloucester-Hartpury women’s quadruple sculls team, made up of Hartpury students Alice Bowyer, Charlotte Hodgkins-Byrne and Jessica Newson alongside AASE rower Flo Pickles. The quad made history for the college this year by becoming the first team to win at rowing’s premier event, Henley Royal Regatta, taking gold in the women’s Under-18 event.

Paralympian and Hartpury Sports Ambassador Mel Nicholls, meanwhile, has had a year to remember after winning T34 100m bronze and 800m silver medals at the IPC Athletics European Championships in Swansea. The racer also smashed her own world record in the 1500m event by more than 10 seconds at the England Athletics Disability Open Championships.

Hartpury boy Elliott Stooke – now at Gloucester Rugby – to claim the over 18 Rugby Player of the Year award. Hunt, a scrum half for Lichfield in the Women’s Premiership, completed a National Diploma Sport during her time at Hartpury and has represented England at Under-20s as well as playing sevens for her country.

The annual awards, held at Hatherley Manor Hotel, celebrate sportsmen and women throughout the county through fourteen awards including Sports Personality of the Year, Community Club of the Year and Outstanding Services to Sport in Gloucestershire. 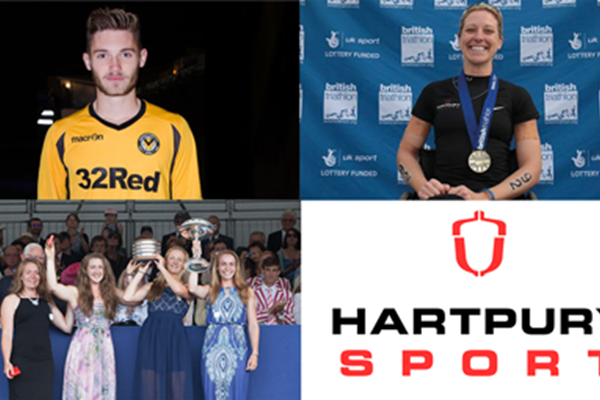