Hartpury College’s Under-18s did not concede a single point for the second week running on the way to a comfortable 36-0 victory over Moulton College in the AASE North League. Hartpury welcomed the Northamptonshire-based college to Gloucestershire; heavy conditions underfoot having an influence on the error count for both teams throughout the game.

In the early exchanges, Hartpury were on top and, after several phases, Hartpury number eight Morgan Morris burrowed his way over from close range, centre Robbie Faulkner adding the extras. Hartpury’s defence held firm as Moulton looked to bounce back, applying pressure deep in Hartpury’s territory.

After a long delay because of an injury to the Moulton centre, Hartpury added to their points tally as winger Taine Finne glided in at the corner to make it 12-0 after a long pass from fly-half Matthew Protheroe. Hartpury continued to apply pressure on the Moulton line and, from a midfield scrum, Myles Churcher scooted blind and forced his way over the line to make it 17-0.

There was still time for Hartpury to cross the whitewash again before half-time. A set play from a line-out saw Faulkner make good yards up the centre. Hartpury then flashed back down the blindside with Protheroe breaking two tackles to race in, scoring from 40 metres out to make the score 24-0 at the break and bring up the bonus point.

After the restart, Hartpury maintained their control, although both teams were plagued by errors.

The pressure proved too much for Moulton with Morris scoring again from a powerful carry off the base of a scrum.

On the 55-minute mark, Hartpury turned over possession in midfield and after recycling the ball through multiple phases, Protheroe put second row Alex Craig over for another Hartpury score. Protheroe added the conversion from out wide to take to the score to 36-0.

As the game faded out, Hartpury’s defence remained resilient and a big hit from winger Finne proved a fitting finale to the win for table-toppers Hartpury.

Fresh from his appearance for the Barbarians the previous night, Under-18s head coach, Sean Marsden, said: “It was a great effort from the whole squad, particularly the way they adapted to the difficult conditions and didn’t concede any points.

“We’ll need to work on our error count around the breakdown though, particularly with a tough clash against second placed Oaklands College next week.” 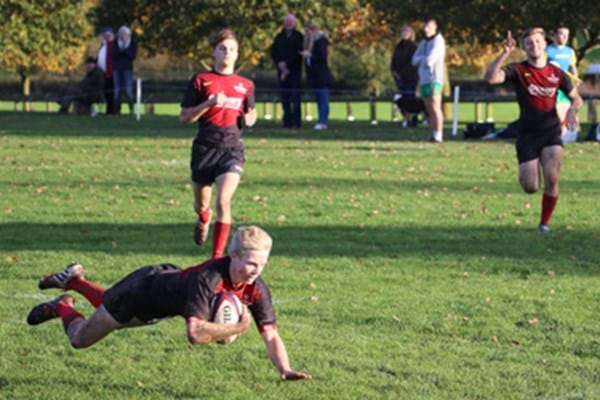