Hartpury continued their good run of results with this convincing performance and, in doing so, brought Cinderford’s recent mini-revival to a halt.

In a feisty local derby, another moment of magic from emerging Hartpury fly half Matt Protheroe, still only eighteen, produced the only try of the match but this victory was built on a strong performance from the Hartpury pack.

The result means that the hosts go into the Christmas break on the back of three successive wins, all against sides that might be expected to be close to Hartpury at the final reckoning.

A little bit of daylight between themselves and the sides at the foot of the table, including Cinderford, should make the season a little more festive. With a few more try-scoring bonus points Hartpury could find themselves in an even more elevated position – only bottom club Macclesfield have picked up fewer.

Cinderford, coming into the game with three wins from four, were not at their best. Overpowered and out-thought at the set-piece, they were slightly more effective in the loose but what ball they did have was rarely translated into sustained pressure.

They were dealt a blow before kick off with the withdrawal of influential forward George Evans, who was absent due to a family bereavement.

For Hartpury, flanker Dan Thomas had failed to recover from an injury collected during the win at Blaydon. Injuries also meant that Hartpury were forced to start with Gareth Thompson, normally a 10, playing at scrum half.

The home side started brightly but it was Cinderford who drew first blood. With Chris Fortey somewhat bizarrely sin-binned by referee Andrew Rawson, they used their numerical advantage to full effect.

Having established a good field position, a cross-field kick from Mark Davies found full-back Mike Wilcox in acres of space to score an unconverted try.

But with Hartpury dominating possession and territory, it was no surprise that two penalties from the reliable Gareth Thompson had the home side ahead at the break. Tellingly, the first of these was awarded at a scrum while Fortey was still missing – a sign of the edge that Hartpury were building in this department.

Hartpury did have opportunities late in the half. Steve Leonard was dragged down after a typically muscular midfield break and, in the closing minutes, a series of attacking scrums eventually came to nothing when the visitors eventually won a scrummage penalty of their own.

The second period had barely started when Protheroe’s moment arrived. A late first half replacement for Burton, the youngster received the ball near half way. In a display of sheer pace and balance, he jinked through the Cinderford defence and all the way to the line via a side-step that just kept him beyond the clutches of the cover.

Although Thompson missed the conversion, he did slot three more penalties as the Hartpury forwards took charge. Playing into a stiff breeze, they opted to keep the ball in hand, with MacDonald, Bartle, Uren and prop Des Merrey, in particular, all making big carries throughout the half as the clock ran down

The increasingly fractious game was interrupted by a number of scuffles in the second half and two minutes before the end Hartpury’s Steve Leonard and George Mills of Cinderford were both surprisingly shown red cards after a relatively minor skirmish. Mark Davies did kick a second half penalty for the visitors, but Hartpury never looked like giving up their grip on the game.

Hartpury next go to Richmond, looking to even the score after a heavy early season home defeat, whilst the Foresters will already be viewing the visit of Darlington Mowden Park as a game they have to win. 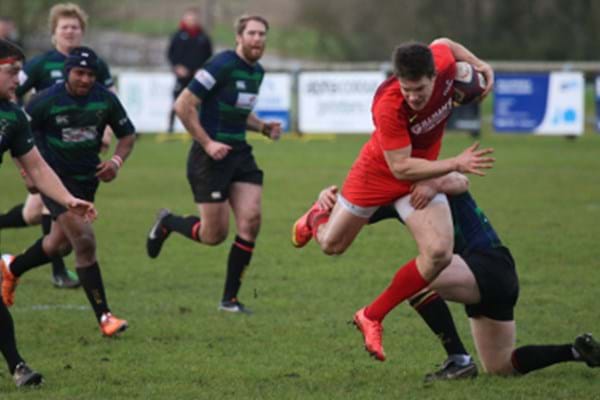