Hartpury ended a run of five defeats with a gritty performance against their Hertfordshire visitors, but they had to wait until the very final play of the game before this hard-fought fixture was decided.

It was a win that said much for the character of the team, following on from last week’s season-low performance at Loughborough. Although still very far from perfect, Hartpury will be pleased with the visible improvements.

They won all of their own line-outs, whilst frequently making life difficult on the visitors throw. In possession, they looked after the ball far better, allowing the team to play with a tempo and continuity that was so markedly missing a week ago.

Still a worry will be the failure to turn possession into tries, despite the potential behind the scrum. Rookie fly-half Matt Protheroe, again making a huge impact as a second half replacement, does offer a really exciting option for the student side and it will be interesting to see how he is used in the weeks ahead.

Mitch Burton, returning from injury, started the game at 10 with Gareth Thompson, also a stand-off, deputising at scrum half for Ben Ellis who had pulled up during the pre-match warm up

On a crisp Gloucestershire afternoon most of the scoring came in the second half, with only a Thompson penalty separating the teams at the interval. This was a poor return for Hartpury, who had largely dominated possession, if not territory, before the break.

There was certainly more fluency than in recent weeks, but the nearest that either side came to a try was when Steph Reynolds got onto the end of a pin-point cross-field kick from Burton, only to be dragged into touch metres short of the OA line.

Albanians, in complete contrast to Hartpury, came into the match on a five-game winning run. Featuring Hartpury old-boy Jordi Pasqualin at scrum half, they played a conservative pattern in the first half and showed good resolution in defence, particularly in the opening 10 minutes when they hardly got their hands on the ball.

However, they opened the second period with a try.

With skipper Chris Fortey still in the sin-bin from a first-half transgression, the home side were heavily pressured on their own scrum. Going backwards, the ball was shovelled sideways and it was no surprise when Old Albanian centre Dan Watt intercepted 30 metres out.

Watt was dragged down inches short but the ball was scooped up by second row Lloyd Bickle, who scored under the posts.

Hartpury quickly introduced under-18 lynch-pin Protheroe and the impact was immediate. Taking the ball in midfield, he stepped his way through the Albanian defence before feeding the supporting Ruaridh McConnochie (pictured). The full-back still had work to do, but he broke one tackle before out-pacing the cover defence to touch down.

Thompson’s conversion made it 10-7 but, on the hour mark, OAs fly half Richard Gregg punished a Hartpury off-side to even the scores from in front of the posts.

Albanians had another shot at goal with six minutes of the match remaining, but Watt’s ambitious long-range effort was dragged wide.

With full-time approaching, Hartpury gathered themselves for a final assault. Orchestrated by Protheroe, they combined forwards and backs in a series of surges, stretching the visiting defence to both touchlines.

Finally, Protheroe sensed the mismatch. He attacked toward the left corner and cleverly delayed his pass until McConnochie, again in support, was in a position to receive the ball and bundle over, much to the delight of an enthusiastic crowd.

Thompson’s conversion rebounded from the crossbar, but the kick proved to be the final act of a tense and attritional encounter.

Hartpury face a 600-mile round trip for next week’s fixture at Blaydon, in the north-east, before welcoming neighbours Cinderford for the final game of 2014. That match will kick-off at the earlier time of 1.30pm, allowing supporters of either side the opportunity to get to Kingsholm for the Bath fixture later on. 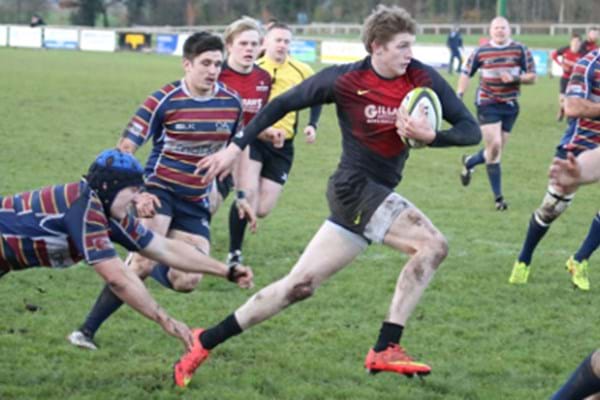