Despite defeat in each of their four previous matches, the general feeling around Hartpury was that the team had not got the results that performances merited.

Thus, there was a certain amount of optimism going into this fixture between the two highest ranked university teams in England. Hartpury were welcoming back influential centre Steve Leonard, after several weeks out with injury, as well as flanker Dan Thomas who had been on duty with Gloucester in recent matches.

Loughborough, of course, has a fine tradition as a rugby-playing institution having produced alumni such as Fran Cotton and Sir Clive Woodward, as well as Welsh legends John Dawes and Gerald Davies. The rise of Hartpury has been a more recent phenomenon and this was the first time that the two institutions had met in a National League fixture.

As it was, Hartpury slipped to a worrying fifth straight defeat, without the consolation of either a losing bonus point or a satisfactory performance.

In a game of little quality - Loughborough’s outstanding half back Henry Taylor excepted - even a scintillating try from jet-heeled debutant Matt Protheroe could not put a gloss on a desperately disappointing Hartpury display.

The College were quick out of the blocks and an early Gareth Thompson penalty nudged them ahead. A second attempt minutes later struck an upright before going wide - and that was as good as the first half got for the visitors. A combination of handling errors and turnovers, particularly during a shambolic series of lost line-outs, put a cap on any ambitions that Hartpury may have had.

Loughborough scored the only try of the opening 40, Gabriel Carroll driving over from a line-out in the face of some unconvincing visiting defence. With a half-time score of 8-3 to the hosts, Hartpury were still very much in the game.

Surely the second half would see an improvement and allow the red and blacks to get their dangerous-looking back division into the game?

However, things only got worse for Hartpury after the break. Errors continued to mount as England U20 scrum-half Taylor showed why he is so highly rated, scoring three sniping tries, all taken from close range through gaps in the visitors fringe defence.

Again Hartpury’s willingness to turnover hard-won possession was their undoing and it was not until the final 10 minutes, with the game already beyond them, that they were able to build any sustained pressure.

Even then, a lack of composure meant that a score looked beyond them until substitute fly half Protheroe, stepping up following a series of outstanding performances at U18 level, made his mark with the final play of the game.

Receiving the ball deep in his own half, he showed the running skills that have terrorised the AASE League this season, skipping past two defenders before out-pacing the cover defence to finish under the posts (pictured).

It was too little and too late to save this match, but at least something for the Hartpury support to savour on an otherwise dispiriting night.

Hartpury now have two home games, plus a difficult-looking trip to Blaydon in the northeast, before the Christmas break. Those home fixtures, against a rapidly improving Old Albanians and a derby clash with Cinderford, will dictate the level of seasonal cheer around the college’s rugby academy this year.

Hartpury RFC would like to thank Loughborough Students for their hospitality and we look forward to the return fixture in March. 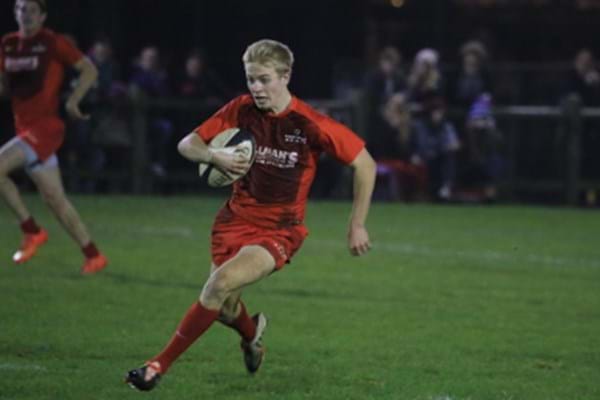