Macclesfield scored in the first and last minutes of this game, but between those isolated successes Hartpury ran in eight tries of their own to convincingly record their fifth straight win.

Despite their good recent run, Hartpury have found bonus points elusive this season but there was no danger of them missing out against a Macclesfield side that looked destined for a swift return to League Two.

Played mostly in a strong wind, blowing directly down the pitch, this was a game in which control and accuracy were always going to be difficult.

Macclesfield may feel that they did not make the best use of the elements in the first half. Other than the early try, scored by winger Matt King when Hartpury failed to deal with a ball hacked through, they were unable to maintain field position and build pressure.

Indeed it was Hartpury who enjoyed most of the first half possession and a typical Steve Leonard run created the opportunity for Reynolds to outpace the cover almost immediately after King’s try.

With kicking not a viable option, the home side elected to keep the ball in hand and Macclesfield were repeatedly penalised as they sought to deal with Hartpury’s ability to play multiple phases.

They suffered a double blow on the half hour, when both Hefferman and Brookes saw yellow within two minutes. The hosts were quick to take advantage.

Hartpury pressure brought a five metre scrum and although the ball was not the cleanest, good hands from Thompson and Jackson allowed McConnochie to complete the scoring from a somewhat scrappy first half.

The second period was different story, as Hartpury, now backed by the wind and energised by the introduction of replacement fly half Matt Protheroe, cut loose.

Within a minute of the restart, centre Leonard once again carved his way through the midfield to feed Protheroe, who coolly beat his man to finish.

Now, Hartpury were looking dangerous every time they had the ball. The industrious Steve Uren finished a good surge involving fellow back-rowers MacDonald and Ludlow, before Reynolds again had too much gas for the visiting defence.

Lewis Ludlow, skipper for the day, rounded off the Hartpury scoring when he was first to the ball after charging down a panicky Macclesfield clearance.

But the moment of the match had come in the 65th minute. Protheroe, receiving the ball off a scrum near the Macclesfield 22, cut back inside to be faced with a wall of blue shirts. He seemed sure to be swamped by the swarming defence but, four or five sidesteps later (pictured), he was under the posts for a try that will linger long in the memory.

Hartpury finished the match with an under-18 half back combination, Myles Churcher having come on for his league debut with 15 minutes to go, but it was again Protheroe who really caught the eye with another exciting performance.

There should also be a mention for the goal-kickers, who slotted seven out of eight conversions on a desperately difficult day. Gareth Thompson landed 100% of his kicks, whilst Craig Jackson kicked one from the touchline late on.

O’Regan’s late consolation try for the visitors will have done nothing to dampen Hartpury spirits. They now have two tough-looking away games at Esher and Fylde, before returning to the College for a fixture with Darlington Mowden Park at the end of January.

We would like to thank Macclesfield for an excellent game and wish them well for the remainder of the season. 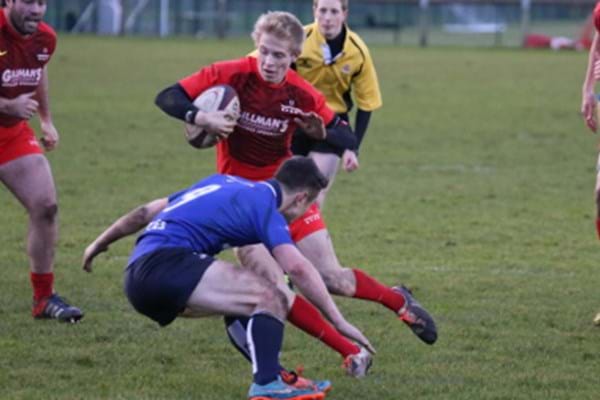