Hartpury consolidated their position in the top half of League One with this impressive win. Five tries and a bonus point were fitting reward for a performance displaying strength and growing maturity.

Esher are vulnerable on the road but known to be strong at home. Prior to this fixture, seven of their eight wins this season had come at Molesey Road.

Hartpury, though, came into the game in fine fettle with a relatively settled side and five successive wins under their belt.

Ruaridh McConnochie tweaked a hamstring in training on the eve of the match, allowing Matt Protheroe to take his place at full-back, while Dan Thomas was returning from duty with Gloucester United. Other than that, this was the same team that so effectively dispatched Macclesfield last week.

It took only two minutes for Hartpury to get ahead. An Esher penalty missed touch, allowing the visitors to run the ball back from deep with Protheroe prominent. Thomas, in support as always, finally got his hands on the ball just yards from the Esher line.

The move appeared to have ended as he was swamped by Esher tacklers, but somehow he managed to squirm out of their grasp before stretching out to score a try that was improved by the reliable Gareth Thompson.

Stung by this, Esher responded well and the next 15 minutes were to be their best of the match.

They attacked through their big forwards, with lock Peter Daly in particular proving to be a handful. Full-back Chisholm was on hand to slot a simple penalty after Hartpury had infringed and minutes later the home side were ahead.

A series of penalties gave Esher an attacking line-out just five metres out and their pack did the rest, skipper Harrison Collins getting the final touch from the catch and drive.

When Hartpury’s Fuller was shown a yellow card in the 18th minute, it looked as though there might be more pain in store for the college side, but instead the game swung back in their favour.

Another attack from deep saw the home defence stretched through multiple phases and the final ball saw winger Jaike Carter free to score in the corner.

With Hartpury back in front, it was time for the visiting pack to take charge. Having looked strong in the opening quarter, the Esher scrum began to creak. Forward pressure resulted in penalties and eventually Thompson was given a simple chance to give Hartpury a 15-8 half-time advantage.

The pattern continued in the third quarter, as Esher visibly wilted in the face of Hartpury’s intensity.

In the 50th minute Esher had a defensive scrum, five metres out. Great pressure from the Hartpury front five gave flanker Thomas the opportunity to tackle the half-back and drive him in goal for an attacking scrum.

Esher were again penalised at the set-piece and, while they were busy debating the decision, Thomas was in for his second with a quick tap and go. Thompson duly converted.

Before the hour was up, play was back on the Esher line. With penalty after penalty being awarded, it was no surprise to see an Esher forward in the bin and even less when referee Holsgrove awarded a penalty try as the Esher scrum, in full retreat, disintegrated (pictured).

With a quarter still to play, the visitors had the bonus point and, effectively, the match. There was, though, one late treat in store.

From an Esher line-out deep in the Hartpury 22, prop Des Merrey somehow emerged with the ball and had the energy and pace to carry up to half way, breaking tackles in the process.

Quickly recycled ball put the young flyer Protheroe in space, making 30 metres before being shut down by the cover defence. However, the equally electric Steph Reynolds was in support to take Protheroe’s pass and finish under the posts.

Hartpury are on the road again next weekend and their winning run will face a severe examination at fourth-placed Fylde.

We would like to thank Esher for their warm hospitality and wish them well for the remainder of the season. 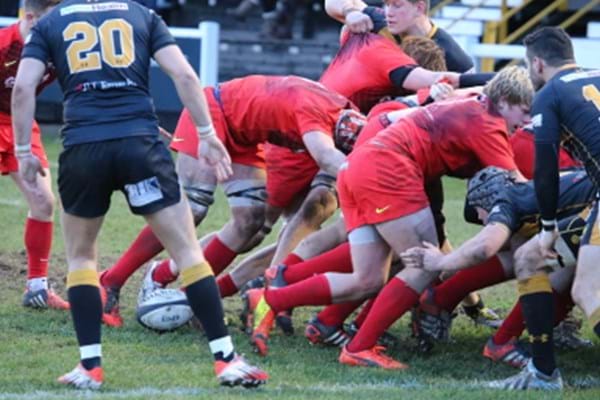