As the ECFA 2014 Champions League winners, Hartpury’s junior elite team have been invited to represent England Colleges FA in the Roma Caput Mundi – the International Juvenile Amateur Tournament – in Rome from March 8th to 13th, 2015.

They will compete against seven other teams that are either full Under-18s international teams or international amateur teams. Those teams are Romania, Albania, Greece, the Italian National Amateur team, a Lazio representative team, Russia and San Marino.

“Participation in this tournament is by invitation only from the Italian Football Federation and it is a tremendous honour for Hartpury to be invited to play as the English Colleges national team,” said Paul Tassell, Hartpury junior football programme manager.

“It is a fantastic opportunity for the boys to represent their country and will be an incredible experience for them competing against such high quality international opposition. It will be a massive boost to their development.”

Hartpury junior football team claimed a 4-3 win over Gateshead with an extra-time winner in the English Colleges FA National Championship play-off final at Stoke City’s Britannia Stadium last season. Earning them the accolade of being the best footballing college in the United Kingdom, it was the fifth time Hartpury have won the competition in seven years.

They also finished top of the ECFA Premier League, while the centre-half duo of Danny Haile and Josh Poole were called up to, and captained, the England Colleges squ

The current junior elite team are riding high at the top of their group in the ECFA Premier League. 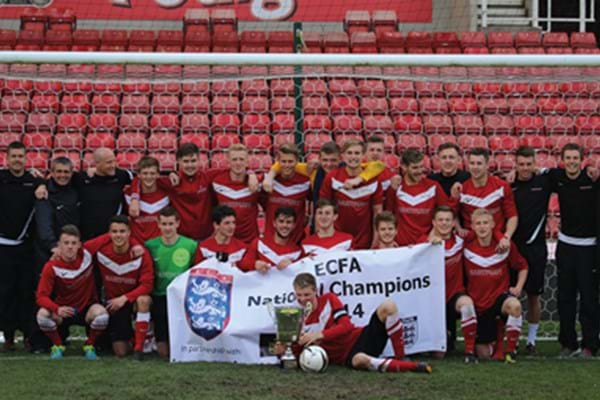