An outstanding team performance laid the foundations for a 4-1 victory, with striker Mustapha Bundu grabbing a well-deserved hat-trick.

Abdul Ganiyu scored the final goal late on to add the gloss to the win, which will now see Hartpury take on Stanmore College in the last four.

From the beginning, Hartpury pressed their opponents and their hard work was rewarded early in the game when midfielder Will Haines intercepted an opposition ball and produced a defence-splitting pass that Bundu latched on to. The centre forward's finish was too powerful for the visiting goalkeeper, giving Hartpury the perfect start.

The ever-threatening Bundu punished Sparsholt’s defence again shortly after, as a long ball from Tom Luce saw him round the keeper and calmly put the ball in the empty net to give the college a two-goal cushion.

However, Sparsholt showed their credentials and the deficit was halved when the reigning champions converted a penalty shortly before the break.

Early in the second half Bundu, who has been called up to the England Schools Under-18s squad, provided a moment of individual brilliance to restore Hartpury’s two-goal advantage.

Collecting a loose ball near the touch-line, the youngster beat two opponents with an outrageous display of skill before cutting back and finishing from the tightest of angles, curling the ball in off the far post and leaving the keeper with no chance.

Ganiyu swept home a fourth late on, to guarantee victory and put Hartpury into the next round.

Paul Tassell, junior football programme manager, said: “It was an absolutely fantastic team performance and I am extremely proud of all the lads. To produce that performance against the current champions shows the quality of the squad and we are already looking forward to the semi-final.

“Mustapha’s hat-trick was a joy to watch and I’m confident that he can continue this rich vein of form!” 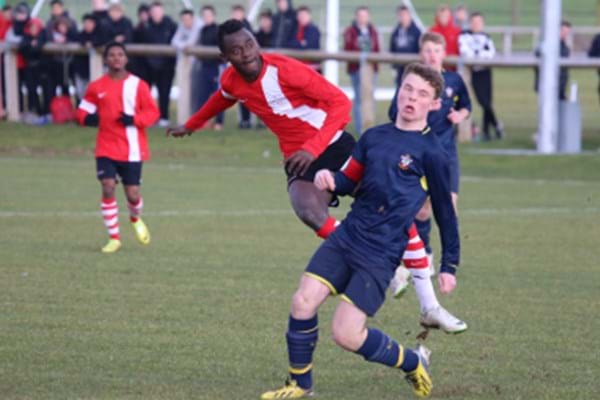