Hartpury student Anna Goddard will cap a whirlwind two years with a World Cup spot as her England touch rugby team travel Down Under.

Goddard, 17, has represented England Women’s Under-18s touch side before, despite having only picked up the sport a short time ago. She will be making her debut as part of the senior set-up though at the World Cup event held in Australia at the end of April.

“I never imagined myself playing touch at this level,” the scrum-half said. “It’s all come around very fast since my very first session back in Cambridge.

“I was at college and my PE teacher played for England and she told me go along and play for my local side. I wasn’t sure at first but she told me it would be good for the development of my rugby union game. From there, she got me involved with the Under-18s and I got the chance to play at the European Championships, which was a great experience.”

The A-level student will be looking to follow in the footsteps of England women’s rugby stars Alex Matthews, Ceri Large, Natasha Hunt and Danielle Waterman and become the next women’s rugby starlet from Hartpury to win a World Cup competition.

And she will be looking to go one better at the tournament than when her Under-18s side lost out to Wales in the final of last year’s European Championships. This is the 17-year-old’s first time as part of the senior set-up and she’s really noticed the step up in class.

She added: “Being part of the women’s set-up for the first time is going to be of huge benefit to me – the standard is even higher and I’ve already learned so much from some of the more experienced players I’m playing with.

“My decision-making has improved as well as my passing and communication; something which has been really helpful as a scrum-half.”

Tournament hosts Australia have dominated the world of touch for more than two decades. Both the women’s and men’s open events have been won by Australia at every opportunity since the tournament started.

“If you’re going to go anywhere for a Touch World Cup, Australia is the place to go – the sport is huge over there and they have some of the best teams in the world,” said Anna.

“I’m hoping that I’ll learn a lot about the game from being there which I can take forward in my future development. For any young player, this is an incredible opportunity.

Goddard, who is part of the women’s rugby AASE academy at Hartpury, has found that the newer format of the game is helping her improve her skills in the 15-a-side format.

“The game is a lot tougher on your fitness than 15s due to the sheer amount of running involved,” she added. But at the same time there are a lot of transferrable skills like passing, movement and footwork which transition well between the two games.

“I would love to carry on playing both forms of the game moving forward. Being involved in touch has helped improve my rugby skills massively and I just want to continue to get better.” 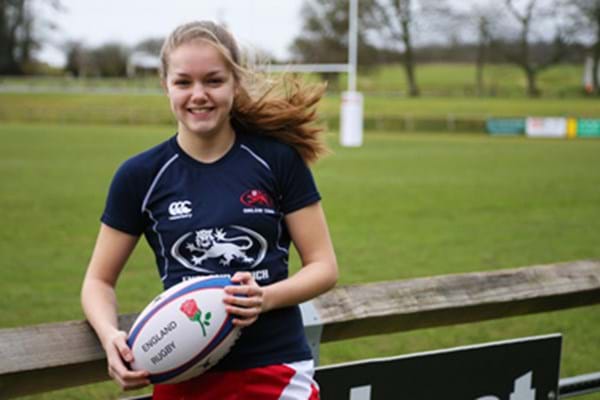