Hartpury’s Under-18s football team booked their place in the final of the English Schools’ Football Association (ESFA) Boys Colleges Trophy after coming from behind to defeat Stanmore College 2-1.

Trailing 1-0 at half-time, Hartpury produced a fantastic second half display to take control of the game and secure their final berth, with England Schools Under-18s striker Mustapha Bundu leading the way with a fine double.

The squad will now face Myerscough College in the final, with Hartpury looking to take the trophy for the first time since 2010.

Stanmore started brightly and Bundu’s England Schools Under-18s teammate, centre half Lewis Fogg, had to be alert alongside the rest of the defence to stifle early threats.

The away side’s pressure eventually told and Hartpury found themselves a goal down after a free kick from the left found the head of a Stanmore player, who leapt in front of goalkeeper Adam Westbury and directed the ball into an empty net.

The goal spurred Hartpury into action with winger Callam McOnie beginning to find some joy on the right flank and Bundu stinging the goalkeeper’s hands with a snapshot from outside the penalty area.

Hartpury were almost level moments later when Bundu laid the ball off for Abdul Ganiyu, whose rasping drive beat the keeper but struck the foot of the post.

Centre midfielder Will Haines, who impressed throughout, then found captain Jake Robinson in an attacking position but the left back was unable to capitalise after volleying an effort wide.

The home side continued their search for an equaliser before half-time but had to be wary of Stanmore’s counter-attacking threat, and their opponents almost doubled their lead after an effort on goal struck the woodwork via a deflection.

Junior football programme manager Paul Tassell’s half-time words sparked Hartpury into immediate action and Bundu began to cause problems for Stanmore’s defence after a powerful solo run saw him glide past two players but drag his shot across goal.

The side continued to press and 10 minutes later, a fantastic cross-field pass by industrious left winger Sam Hicks found McOnie in space, and after jinking his way past his opponent, his low cross found Bundu, who could not quite supply the finish that the build-up play deserved.

The pressure was beginning to tell on Stanmore, and halfway through the second half, Hartpury levelled.

A defence-splitting pass from centre midfielder Harry Jenkins found Bundu, and the forward skipped past the defence with ease and produced a composed finish.

This provided further impetus for Hartpury and Bundu was looking extremely lively. Just a minute later, the talented striker flicked the ball over a defender’s head inside the penalty box and unleashed a powerful drive destined for the bottom corner, forcing the goalkeeper into a fantastic save.

Bundu was not to be denied next time though. With the game heading into the final 10 minutes, a long ball from Hicks was latched on to by the striker, and with the keeper bearing down on him, he produced a delightful chip from the tightest of angles to give Hartpury the lead.

Hartpury saw out the game in complete control and almost scored again after another mazy run by McOnie saw his effort fizz across the goalmouth.

Tassell said: “I am so proud of the whole side and it is a fantastic achievement to reach the final. Our second half performance was a joy to watch and showed the quality that we have against a tough physical side. We deserved this win by playing good football and we now cannot wait for the final against Myerscough.

“It will be another tough game but I have complete confidence in the lads’ ability and I know we will all be ready for the chance to win the trophy. They deserve this special day for all their hard work.”

Tassell’s attentions now turn to tomorrow, with the Under-19s facing off against Strachan Football Foundation first XI in the last 16 of the English Colleges FA Premier Cup. 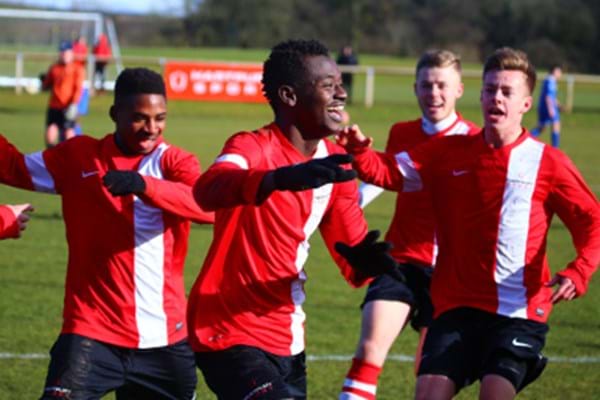