A stirring second half comeback from the Gloucester-Hartpury women’s rugby team saw them secure a semi-final berth in the Women’s National Junior Cup.

The team produced a fantastic display after the interval, scoring 24 unanswered points to defeat Warwickshire side Old Leamingtonians 31-12.

After trailing 12-7 at half time, the team’s strong running and solid defensive work eventually shone through, with four tries and no points conceded a just reward for their efforts.

In the absence of head coach Susie Appleby, who is away with the England Women’s Sevens squad in Brazil, current Hartpury students Jack Norris and Henry Benson took the reins.

The team capitalised on their first opportunity 20 minutes into the game when fly-half Jess Morgan released winger Charlie Norman, who broke several tackles on a 40-metre run and touched down in the corner.

This sparked their opponents into action and after two scores the Gloucester-Hartpury side found themselves 12-7 down, and the difference could have been greater were it not for some ferocious defending.

The second half began in a similar vein, with Gloucester-Hartpury producing some great cover tackles to prevent Old Leamingtonians from crossing the whitewash.

The tide then began to turn as centre Hannah Hart showed nice footwork and power to score by the posts. The full-back Emma Mundy duly converted to take the lead.

Inside centre Jade Shekells then picked a line in midfield and she broke away to score before Zoe Aldcroft followed up with a tremendous solo run, and despite being held up on the line initially, the number eight scurried over at the next attempt to put Gloucester-Hartpury 26-12 up.

Stout defence from the squad then kept the home side at bay, and in the final minute, Mundy was able to scurry over after the ball was turned over.

Benson, currently studying for a degree in Sports Coaching at Hartpury, said: “It was a great game with both teams playing positive, attacking rugby.

“It was a fantastic team performance and to battle back from five points down is a real testament to their hard work and determination. We showed some real class in many areas and if we continue to develop then we have a great chance of being successful in the cup this year.”

This is the first season of the Gloucester-Hartpury franchise. Set up with the aim of growing the women’s game in Gloucestershire and building a side to eventually compete in the Women’s Premiership, the team’s cup run and success in a crop of friendlies will provide a great springboard to build upon.

Meanwhile, a contingent of current and former Hartpury students made up a third of the starting line-up for England in their Women’s Six Nations opener against Wales on Sunday.

Centre Abbie Brown and winger Sydney Gregson, who are part of the hugely successful Advanced Apprenticeship in Sporting Excellence (AASE) Women’s Rugby programme at Hartpury, made their international debuts in the fixture, and they were joined by a trio of former Hartpury players, including Megan Goddard and World Cup winners Alex Matthews and Ceri Large, in the starting XV.

Bianca Blackburn, a former Hartpury A-level student who was also on the AASE programme at the college, made her England bow in the game as she came on as a replacement.

In a competitive game, the Welsh side eventually prevailed as 13-0 victors, and England will be looking to bounce back when they entertain Italy at the Twickenham Stoop next Sunday, February 15th at 2pm. 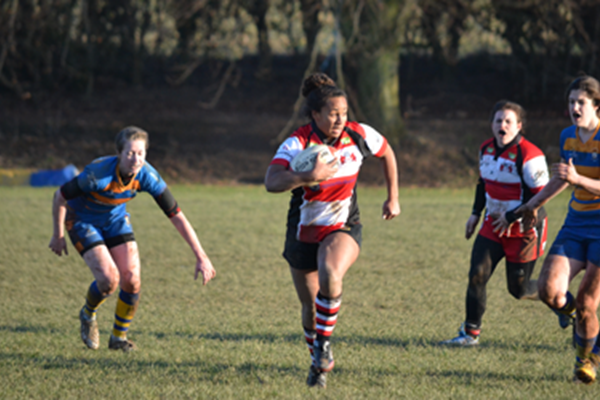