Hartpury's amazing away form continued as they rocked promotion-chasing Coventry on their own turf. The away record now reads Played 12, Won 9, Lost 3 and the team have won all of their last six fixtures on the road.

Although Hartpury are now acclimatised in National One, there is still a thrill in turning up to play at one of the ‘big boys’. So it was on Saturday, when the students travelled to face Coventry, a club dripping in history and tradition and still capable of drawing good crowds.

When the teams had met on a rain-sodden Hartpury pitch earlier in the season, the home side had charged into a significant lead, only to be dragged back and ultimately overhauled by a Cliffie Hodgson penalty in the dying moments.

On Saturday, in the final play of what felt like an extraordinarily long second half, Coventry were again awarded a kick no more than 25 metres from the posts. Hodgson, previously faultless from the kicking tee, pulled his kick inches wide of the left-hand upright and Hartpury had the win.

It was no more than they deserved. In no way over-awed by the surroundings or the large and vociferous crowd, they had been the more positive and dynamic side, particularly in a first half during which they completely out-played their hosts.

The determination was obvious from the first scrum, when Coventry’s big pack were shunted backwards, a feature of the game throughout. Huge credit for this goes to the visiting front-row of Flook, Tanner and Brockett.

A particular mention goes to Mike Flook who, having mainly played at university level so far this season, not only stepped up fantastically well but also put in a full 80-minute performance, his scheduled replacement, Des Merrey, having to leave the field with injury after just one play early in the second half.

Both sides had come into the game having just surrendered long unbeaten runs. Coventry, who had racked up 18 wins and a draw prior to last week’s surprise defeat at Esher, particularly needed a win to keep alive their dwindling hopes of promotion to the Championship.

Hartpury’s defeat to Ealing was less of a shock but, faced with a run of tough games, it was important not to repeat the temporary slide witnessed in the autumn.

They were bolstered by the return of Joe Batley and Rory Bartle from international duty, although missing the talents of Mat Protheroe for similar reasons. Apart from Flook, Alex Brown was also stepping up from the university side and it was he who crossed for the first try after 13 minutes.

Hodgson and Hartpury’s Gareth Thompson had traded penalties early on, before Hartpury built up a head of steam. From midway in the Coventry half, Batley put in a characteristically bullish charge, breaking tackles and getting behind the home defence.

The momentum was continued by Tim Brockett (pictured) and when he was pulled down the ball was quickly in the hands of Ben Vellacott.

The scrum half’s dart pulled in more defenders and, when the ball was moved wide, Brown was in acres of space to not only score, but also to get behind the posts.

Hartpury were bossing the game at this point and it’s hard to remember Coventry threatening before the break.

The lead was extended on the half hour. The home team were penalised in midfield and Craig Jackson spiralled a beautiful kick into touch, less than 10 metres from the Coventry line. The line-out, pretty much spot on all day, was cleanly won.

Hartpury’s forwards needed no second invitation and an impressive drive rolled over for the try, flanker Callum Bowden getting the final touch.

Coventry needed some inspiration and the introduction of replacement fly-half Matt Jones at half-time was an instant success.

The home team started the second half with an increased sense of urgency and less than two minutes had elapsed before Jones scampered over for a try which he converted himself.

Still, however, it was Hartpury who were playing the more incisive rugby.

With 53 minutes gone the Coventry defence was breached again. Good phase play had the home team stretched and Jamie Forrester, on for the injured Steph Reynolds, took full advantage.

Coming into the line from full-back, a hint of a dummy allowed him to step inside Coventry winger Rundle before his inside ball put Vellacott under the posts.

To their credit, Coventry fought hard until the final whistle. A try from ex-Hartpury student Loti Molitika, named as man of the match for the home team, and another Hodgson penalty had the gap down to two points, before the game reached its climax with Hodgson’s fateful miss.

Hartpury have the luxury of a week off next Saturday, before we welcome fourth-placed Blackheath to Gloucestershire on Saturday, 7th March (2.30pm).

We would like to very much thank Coventry RFC for their warm hospitality and wish them well for the remainder of the season. 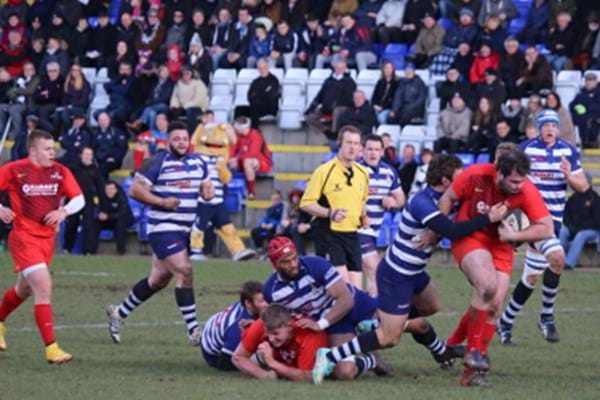