While UWE Bristol brought a physical edge to the game; it was Hartpury’s superior pace and tactical nous that proved the difference between the two teams.

The win means Hartpury stay hot on the heels of both University of Wales Trinity Saint David and Aberystwyth Universities to stay in contention of gaining promotion in the BUCS Western League 2B.

Both teams started the game in a spirited fashion, both teams having periods of possession. It was Hartpury that capitalised first on their spell of pressure through a try scored from close range, winger Ruth Taylor slicing through the opposition defence. Mundy slotted the extras.

This try got the ball rolling for Hartpury as three tries followed in quick succession though centre Kumar and back row partners Robinson and Kirtley.

The next score was to be the try of the game, Taylor touching down after an outstanding solo effort that saw her break several tackles before stepping inside the last defender to score.

There was time for another superb solo effort before half-time as fly-half Hart went over after showing great pace from halfway, Mundy converting to bring the half-time score to 40-0.

Soon after the break, Hart and Kumar both added a second to their try tally, with Hartpury putting great width on their play.

Despite trailing on the scoreboard, UWE showed great resolve, scoring two unconverted tries from close range after an assault on the Hartpury line.

The closing stages saw both Hart and Taylor seal their hat tricks; again demonstrating slippery footwork and pace, before the faultless kicker got a try of her own, again adding the extras to take the final score to 75-10.

Head coach Henry Benson said: “I am delighted with the girls’ progression so far this season. At the start of the season, some of the girls had joined us from other sports and the others had little experience in the 15-a-side game, only having played Sevens. We have improved no end.

“It’s brilliant to see the girls getting a lot of exposure to rugby with a lot them also playing and training with the Gloucester-Hartpury women’s team on a Sunday. Having up to 50 players in training every week shows the girls’ enthusiasm for the game and their willingness to understand the different facets. It’s starting to show in the results we are getting in competitive games. As long as we continue to improve, I believe the girls can push for promotion.” 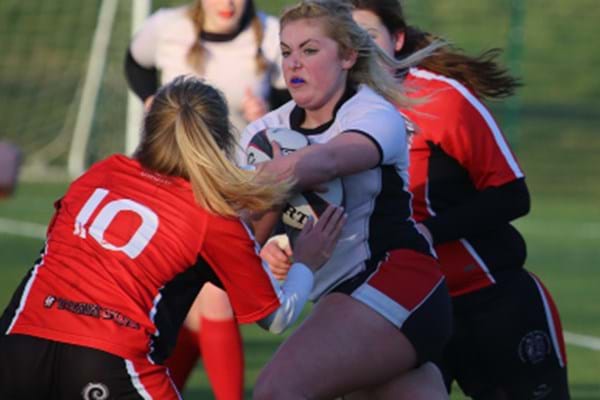