Hartpury tasted defeat for the first time in more than two months as they were swept aside by leaders Ealing.

Although there was no disgrace in losing to a side who have been beaten only twice this season and seem destined for the Championship, Hartpury will be disappointed with a performance that, particularly in the first half, fell short of the levels set recently.

Ealing, skippered by former Hartpury student Tom Brown, fully demonstrated their strength, both with and without the ball, and before the student side become too self-critical they should remember the distance they have covered this season. To be sixth in a tough league with seven games remaining is a solid achievement for this young side.

Indeed, such is the progress made that there were many who thought the College might cause an upset in this fixture, coming into the game on the back of nine successive wins and with a strong selection.

Dan Thomas, Steph Reynolds and Lewis Ludlow were all back on duty after their stint with Gloucester in the LV= Cup, whilst the return to fitness of full-back Ruaridh McConnochie meant that Hartpury had the luxury of keeping developing talent Mat Protheroe on the bench.

Other than teenage forwards Joe Batley and Rory Bartle, on international Under-20 duty with England and Wales respectively, this was close to being a full-strength College team.

Pre-match optimism was soon dashed, however, as Ealing racked up three tries in the first 40 minutes without reply.

At no time in this period could Hartpury establish any kind of attacking platform and only a penalty, struck well by Gareth Thompson with the final kick of the half, saw them register points.

Meanwhile, Ealing took control. First to cross was Daniel Kenny in the eighth minute. Thompson’s kick was charged down on half-way and the ball fell kindly for the visitors. Only a superb cover tackle from Jaike Carter prevented them from scoring.

However the ball was quickly recycled and two phases later the flanker was in acres of space to finish on the opposite wing.

Ten minutes later the lead was extended when an Ealing drive was hauled down close to the Hartpury line and referee Fergus Kirby awarded a penalty try.

Although there was no lack of effort from Hartpury, they were finding themselves out-gunned in all departments, with the exception of the line-out where the jumpers frequently pressurised Ealing ball.

The moment of the match came five minutes from the break. In an exceptional display of off-loading and support play, Ealing attacked from deep up the right hand touchline.

The ball went through multiple pairs of hands before centre Sam Wardingley took the scoring pass and swooped under the posts.

Hartpury made wholesale changes at half time, including the entire front row. They also lost Dan Thomas with a hand injury.

The second half was a much more competitive affair. Hartpury began to get some advantage up front, meaning that they could start to bring their backs into the game as an attacking force.

Scrum-half Vellacott was crisp and dynamic on the heels of his forwards, while the runners outside him started to find some space. McConnochie, who had been one of the few bright sparks before the break, was forced off to be replaced by the equally lively Mat Protheroe.

Nevertheless, it was Ealing who scored again on the hour, Arthur Ellis finishing a catch and drive from five metres out.

From the re-start, referee Kirby, in a rare moment of sympathy with the hosts, carded Ellis for some back-chat and Hartpury took full advantage.

First Tanner touched down from another driven line-out and, four minutes later, the Hartpury pack produced a pushover try for Will Safe (pictured).

Sadly, no. Referee Kirby moved Ealing up the field with a further rash of penalties and hooker Karl Gibson was next to benefit from the catch and drive.

Jaike Cater did grab a last-gasp try for Hartpury but it was merely consolation. The team must now regroup for the trip to Coventry, whose loss at Esher strengthened Ealing’s grip on top spot. 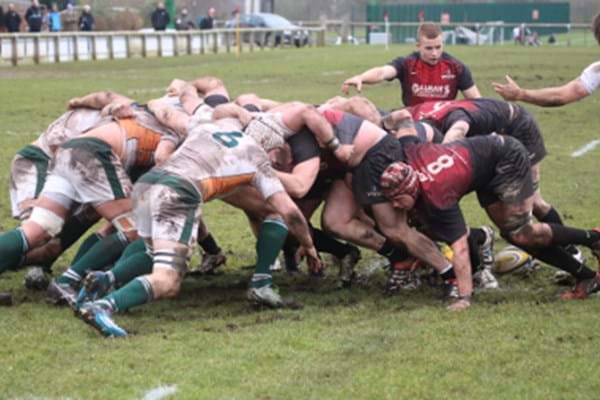