A group of Hartpury sports coaching students spent the day in a referee’s shoes as they showed local secondary school pupils the ins and outs of life as an official.

Hartpury’s Young Ambassador’s, who are a select group of first and second year sports coaching students, spent the day at Forest E-Act School in Cinderford teaching a group of Gloucestershire school children the basics of officiating in a range of sports.

“I’ve learnt so much that I’ll be able to take back to my school and put into practice both from playing and being a referee,” said Megan Cobb, a Year Nine student from Newent School.

“I learnt a lot that I didn’t know before, such as the different types of whistle to signify different events in games, like a long whistle at the end of a rugby match which finishes the game whereas something like a foul requires just a short whistle.”

The Year Nine students were put into different groups and given a chance to referee different games, including rugby and netball, with the Hartpury students overseeing and offering advice.

“It’s all about helping them to understand the skills involved, what the rules of different sports are and hopefully helping them to learn more about the roles of referees and how it could be a potential career path for them,” said Charlotte Punter, a second year BTEC coaching student, who is in her first year as a Young Ambassador.

“It’s great how responsive all the students have been. They’ve really taken on board what we’ve been saying and have shown a real willingness to get involved.”

Around 60 students from local schools including Newent, The Dean Academy and Wyedean School attended the day alongside pupils from the host school.

Hartpury first year BTEC Sports Coaching student, Dom Musgrove, 16, said: “We gave them an exercise once they had started to pick up on the basics of officiating. We got them to invent their own game and make up rules that would enable them to referee the game. They all seemed to pick it up pretty quickly.

“A lot of the children here are keen sportsmen and women so this is a great opportunity for them to learn more about sport from the point of view of an official, rather than as a competitor.

“I want to be a teacher when I’m older so this is an excellent opportunity for me to test my skills out and see how well I can get the kids to understand what I’m trying to teach them.”

Hartpury’s Young Ambassadors were previously involved in an athletics event at Mitcheldean’s Dene Magna School. The group helped the children to take part in a variety of track and field events including javelin, long jump hurdles and sprinting.

Hartpury will host a third, large-scale leadership academy day in the summer hosting year nines and year fives which will be run by the college’s Young Ambassadors. 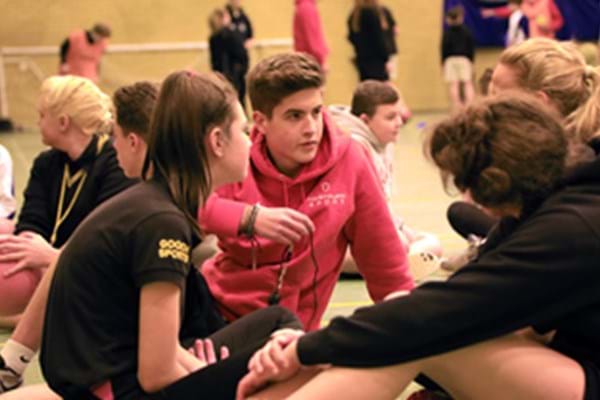