Hartpury continued their good record against clubs from the northeast with this hard-fought and well-deserved victory.

Both teams came into the match on the back of good recent results. DMP had won their previous four while Hartpury, fresh from good away wins at Esher and Fylde, were looking to make it eight in a row.

Having fielded a settled side in recent weeks, Hartpury were forced to deal with the loss of key personnel for this encounter. Out went last week’s hat-trick hero Dan Thomas, along with Steph Reynolds, Joe Batley and Lewis Ludlow – all required for Gloucester’s LV= clash with Ospreys.

However, the college were able to call upon the occasional services of England Sevens flyer Dan Norton – forming a potent-looking back three with Mat Protheroe and Jaike Carter. Also making a welcome return to the bench was Scotland U20 scrum half Ben Vellacott, missing for the whole season so far through injury.

DMP’s decent start to life in League One has been built around a powerful set of forwards and they made their presence felt in the opening exchanges.

Indeed, they may have expected more from series of scrums close to the Hartpury line but eventually it was the hosts who were able to turn up the power and turn the ball over.

Last week, at Fylde, the damage was largely done in the first half and so it was to be here as Hartpury rocked the visitors with three tries in six minutes to take control of the game.

The first came in the 18th minute. In a stiff breeze and in their own half, DMP risked a line-out throw towards the tail. The ball was overthrown and Number 8 Seb Negri was able to drive forward, the move being carried on by prop Des Merrey.

After another surge in-field, the ball was cleverly switched back towards the right hand side. Mat Protheroe took Jackson’s pass on the 22 and quickly realised that the defenders in front of him were mainly front five forwards.

Faced with that mismatch he needed no second invitation and good feet saw him behind the posts to score.

Better was to follow shortly after. DMP drove forwards but Steve Uren’s tackle forced the fumble. Spotting an open field, Hartpury again attacked to the right, winger Carter making ground before straightening his run to fix the home defence.

Protheroe was again in support, although he still had plenty to do. This time it was sheer pace that saw him get outside the defence and beat the covering Robinson on his way to the corner.

Gareth Thompson, in another faultless kicking display, added the extras with an excellent touchline conversion.

Protheroe and Carter were both involved in the third. The youngster launched a high ball that bounced on the DMP 22. Winger and full-back somehow made a hash of dealing with it and Carter’s superb chase allowed him to capitalise with a further five points, again improved by Thompson.

The DMP full-back had his misery made complete on the stroke of half time. An inside ball released centre Craig Jackson through a yawning gap in the visiting midfield. Robinson was the last line of defence but was left motionless as Jackson stepped past him and over by the posts.

A bonus point and a 28-0 lead was a comfortable half time scenario for the hosts. DMP, now assisted by a diagonal cross-field wind, did respond in the 48th minute when their scrum drove over for Cox to touch down, but Hartpury rose well to the challenge.

With flanker Tom MacDonald (pictured), excellent in recent weeks, leading by example they gave as good as they got, as the game became something of an arm-wrestle.

DMP did cross twice in frantic late attempt to salvage something from the game, but tries from Kill and Johnston were too little, too late as they contemplated the long journey home without any sort of consolation.

Hartpury make a similar journey next week, visiting strugglers Tynedale, before big matches against leaders Ealing and Coventry to test their growing confidence.

We would like to thank Darlington Mowden Park for a closely-contested match and wish them well for the remainder of the season. 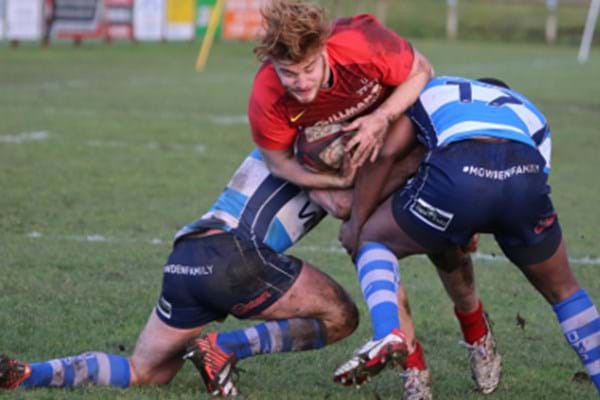