Hartpury eventually secured win number nine in succession, but were made to fight all the way by a team digging deep for League One survival.

Not until replacement winger Alex O’Meara dotted down with last play of the game was there more than a handful of points between the sides and, despite Hartpury having the edge in possession, the hosts had led for long periods.

On the college’s first ever visit to this friendly Northumbrian club, they were relieved to arrive in fine weather and find a pitch in decent condition.

Tynedale have had a tough season, falling into the bottom three after some good early results as playing resources have been stretched by injury and non-availability.

This was frequently a frustrating afternoon for the visitors. Despite a good measure of control at the set-piece, backed up by effective work at the breakdown, it was one of those days when passes were often misplaced and handling erratic.

For the second week running there were major changes in personnel. Both starting props from previous weeks were rested, with James Gibbons returning at loose-head for the first time this season and Tim Brockett on the other side.

Rob Fuller replaced Rory Bartle, absent with Wales U20, at lock while both Will Safe and Callum Bowden were drafted in to the back row.

Outside, Ben Vellacott made his first start of the season at scrum-half with Gareth Thompson moving to 10 and George Boulton getting a chance at centre. England Sevens flyer Dan Norton continued on the wing.

Hartpury made an all-action start and dominated the opening passages of the game. It was no surprise when the deadlock was broken after 12 minutes.

Boulton and Norton attacked towards the left had touch-line where they found flanker Bowden in support. His inside ball found the hard-running James Voss who, in turn, fed Vellacott.

The nippy Scotland U20 man stepped inside the cover defence to round off a good team try, although Thompson was inches wide with the conversion.

Based on the recent form of both clubs, Hartpury might have expected to build on their good start and pull away, but it was the hosts who raised their game to be next on the score-sheet.

Uncharacteristically, it was missed tackles that allowed powerful back row forward Scott Powell to make big yards into Hartpury territory. Although he was eventually collared short of the Hartpury line, his off-load allowed tight-head prop Mark Irving to finish.

From here the game settled into something of a stalemate, with both teams enjoying spells of possession but much of the play being conducted between the 22-metre lines. Hartpury continued to enjoy more of the ball but their lack of precision prevented them from capitalising.

Thompson and Connon traded penalties before the break and the northerners extended their lead when the latter landed a monster from half way in the 50th minute.

With frustration growing, Hartpury made changes and had their reward just after the hour. Excellent number eight Will Safe made good ground through the midfield, breaking tackles and drawing in defenders (pictured).

The ball was quickly recycled and Mat Protheroe set off on a typical jinking run toward the posts, looking set to score before being dragged down three metres short.

Quick ball, again, saw Hartpury with a massive overlap to the left but replacement centre Craig Jackson instead took responsibility, his big dummy wrong-footing the cover and allowing him to score near the posts.

Thompson’s conversion was good this time and now Hartpury had a two-point lead.

As the game reached it's climax the two kickers again swapped penalties, before Connon was short with another ambitious effort from long-range.

The visitors launched themselves into a final assault and the forwards established a good position deep in Tynedale territory. Thompson’s grubber behind the defence was perfectly weighted for O’Meara who, after some good footballing skills of his own, was able secure the win and break Tynedale hearts.

We now face a tough run of games against the teams currently occupying the top four slots in the division. The first of these is a mouth-watering home fixture with leaders Ealing next Saturday (2.30pm).

We would like to thank Tynedale RFC for their warm hospitality and wish them well for the remainder of the season. 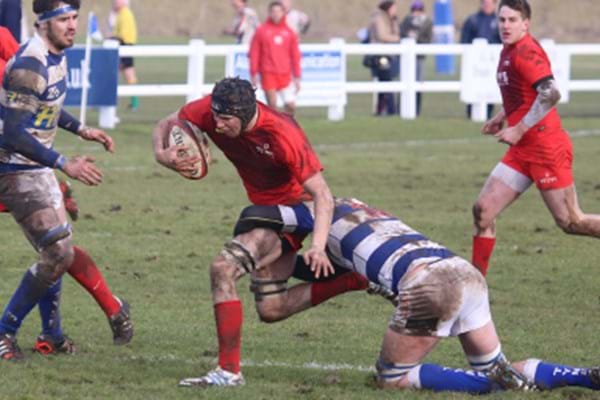