“I would love to row at the Olympics with my sister” - that’s the dream of Charlotte Hodgkins-Byrne, the latest Hartpury student to be making waves on the Great Britain rowing scene.

A-level student Charlotte, formerly a keen horse rider, has only been rowing seriously for three or four years after taking up the sport while studying at her last school in Hereford.

Now the 18-year-old and her sister, Mathilda – a Hartpury graduate, are both lighting up the youth rowing scene with impressive performances at national level. Charlotte recently topped the timesheets at the British Rowing Indoor Championships while Mathilda finished as the top Under-23s rower at the most recent round of Great Britain time trials.

Last summer, Charlotte was part of the historic Hartpury crew that claimed the first ever women’s Under-18s Diamond Jubilee Challenge Cup at rowing’s blue riband event, Henley Regatta – a title the crew will be looking to defend this year.

And while Charlotte’s dream is to become the first Great British sister duo to race in the same crew at the event, she also knows it’s important to keep her feet firmly on the ground.

“Rowing at the Olympics with my sister would be really cool, but at the moment it’s just more concrete aims, focusing on the here and now and trying to win all the quad events we have coming up this summer,” she said.

“We’ve got a lot of big races coming up and I can’t wait to properly get back into crew boats. My strength is definitely as part of a team; I’m much faster in a crew than I am by myself.”

Despite having admitted to copying her sister by following her into the world of rowing and then to Hartpury, there appears to be none of the expected sibling rivalry.

“When I was at my old school, I basically just copied my sister Mathilda with the rowing,” Charlotte said. “I joined the rowing club and did it on and off for a while, recreationally, and I really enjoyed it.

“I’ve always been fairly sporty – I did a lot of riding and hockey before I started rowing, as well as odd bits of cross-country running.

“My sister and I have been rowing about the same amount of time. Mathilda has been doing it about a year more but it’s good because we’re able to compare ourselves to one another on our performances. I’m faster across two kilometres on a rowing machine but on the water she’s much faster than me.

“Everyone always thinks that we’re going to be really competitive, but it’s really not the case; in fact it’s the exact opposite. We try to help and encourage one another as much as we can. She’s always there for me and has been a massive help.”

Despite only being two years apart, the sisters have yet to face off in competition but that’s likely to change next season as Charlotte move up to Under-23s level.

“I don’t think I’ve ever directly competed against her in the same race but I’ve rowed alongside her on occasions, which has been really fun,” added Charlotte.

“At the start of this year, Flo [Pickles] (another Gloucester-Hartpury rower) and I got to team up with my sister and Beth Rodford – a GB Olympic rower – at the Senior British Champs which was a great experience.

“It won’t be long before we have to start racing against one another but I really don’t think it will affect the way either of us race.”

Charlotte is in her final year at Hartpury and is hoping to go to university in London where she will continue her rowing as she makes her way up to the next rung of the international ladder.

“A lot of my friends don’t understand just how tough rowing is and the sacrifices you have to make if you want to get to the top, but it’s definitely worth it. I’ve gained so much more than I’ve had to give up.” 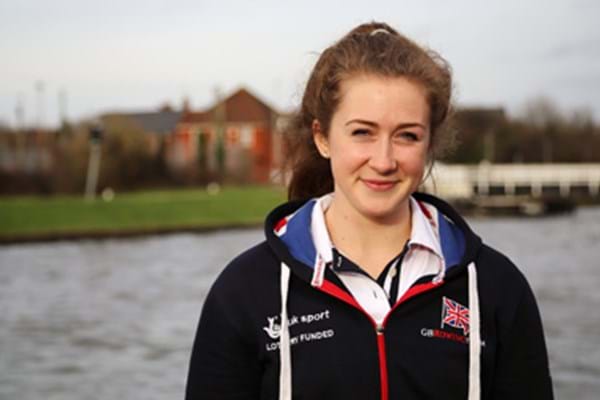