Holders Hartpury set up a clash with last year’s beaten finalists Leeds Beckett, who beat Bath University in their quarter-final.

Welcoming Durham to the West Country, Hartpury started the game looking to capitalise on a stiff breeze at their backs.

In the early exchanges, nerves seemed to have the upper hand, with both teams struggling to settle. Only a long distance kick at goal from the Hartpury's Gareth Thompson, that struck the crossbar, threatened the scoreboard.

The game sparked into life on 10 minutes when winger Alex O’Meara ran the ball back from halfway off a loose Durham clearance kick.

Weaving his way up to the 22-metre line, he popped the ball up to supporting captain George Boulton, who was pulled down just short. Quick ball from the resulting ruck enabled Thompson to throw a long pass that found second row Rob Fuller in acres of space to run in. Thompson added the extras.

Providing impetus for Hartpury, the score spurred them on to double their lead minutes later. A Durham fumble close to the touchline deep into Hartpury territory was picked up by Boulton.

With no cover at home for Durham, his well-weighted long kick invited full-back Alex Brown to easily win the race to dot down. Thompson again provided the conversion.

A response did come from the northerners on 25 minutes when sustained pressure on the Hartpury line resulted in Durham’s flanker crashing over after taking a neat inside line off his outside-half, who duly added the extras.

Using the wind to get deep into opposition territory, Hartpury responded to their defensive blip by looking to increase their lead further.

With a penalty awarded, a speculative cross-kick was mis-fielded by the Durham winger before O’Meara pounced on the loose ball to touch down. Thompson again supplied the extras, to make it 21-7.

Moments before the break, Hartpury held a Durham surge on their own line, winning a penalty to relieve pressure.

Having already had difficulties at the line-out, the overthrown Hartpury ball was picked off by Durham, who released their backs to break the midfield and score through their winger. The try brought an erratic first half to an end, leaving the half-time score at 21-14.

Playing into the wind in after the break, Hartpury came out with a clear mindset to keep possession of the ball and, in the process, looked a far more efficient team.

Buoyed by the home crowd, Hartpury moved the play swiftly to either touchline, allowing Brown to grab his second try, cutting the line at pace and wriggling over in the corner. Thompson’s conversion struck the post from wide out.

Brown’s involvement in the game was not over, as he proved pivotal in Hartpury’s next try. Gathering a clearance kick, Brown carried the ball up and chipped the rushing defence.

Reclaiming his own kick, he carried deep into Durham’s half before offloading to replacement winger Mark Harrison, who crossed the line unopposed in the corner.

With 10 minutes to go, and despite being by now in complete control, handling errors starting to creep back into Hartpury’s game.

However, they rounded off their scoring through a powerful driving maul from close range, flanker Kyle Frowen betting the final touch. Thompson again added the kick to take the final score to 38-14.

Captain George Boulton said: “After a wavering first-half performance, we were obviously very happy to produce a solid win against a team such as Durham and progress into the semi-finals.

“However, as a team, we are fully aware there are areas of our game that we need to work hard on in training if we are going to go to Leeds Beckett and win.

“Going up north is going to be a tough task, but taking the positives from this win, we firmly believe we can go up to Leeds and get the right result.” 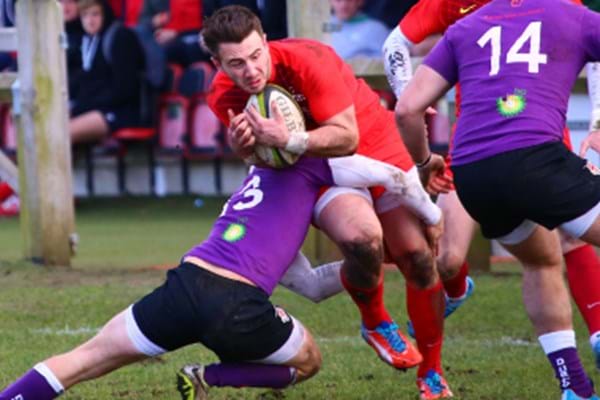