Playing at League One Doncaster Rovers’ Keepmoat Stadium, the Under-18s first team showed tremendous resolve and character to hit back to level the scores three times.

And when defender Lewis Fogg scrambled home a third equaliser for Paul Tassell’s side in the seventh minute of injury time, a visibly rejuvenated Hartpury then clinched the honours in extra-time with striker Mustapha Bundu supplying the winning goal to produce a 4-3 win; Hartpury reclaiming the trophy for the first time since 2010.

Just eight minutes in, Myerscough were ahead. An innocuous effort from the far right caught Cox unawares, with the ball beating the Hartpury keeper at his near post.

The goal spurred Hartpury into action with wingers Callam McOnie and Sam Hicks beginning to get more involved; McOnie causing particular problems down the right flank.

With 15 minutes gone, another mazy run by McOnie saw him scythed down in a dangerous position just yards outside the penalty box.

From the resulting free-kick, Bundu produced a low effort that went under the wall and past the keeper to equalise.

Neither team were able to stamp their authority, but when a Hartpury attack broke down in the 28th minute, Myerscough countered swiftly with their winger outstripping Hartpury’s defence for pace and producing a tidy finish to restore their one-goal advantage.

Hartpury looked to respond quickly with Abdul Ganiyu and Bundu combining well, but their hopes were dealt a blow when Luce was forced off with an injury. He was replaced by Harry Jenkins and the centre midfielder immediately produced a strong challenge to raise Hartpury’s intensity.

It had the desired effect. With half-time approaching, Bundu and Ganiyu again linked up well, and the latter’s half-volley forced the keeper into action.

A long throw was then launched into the box and Bundu produced a spectacular overhead kick which had the keeper beaten but agonisingly struck the bar.

With the game reaching the hour mark, good work from centre midfielder Will Haines and Ganiyu saw them set up Bundu, but the England Schools Under-18s forward could only drag his shot across the face of goal.

Hartpury equalised for the second time in the most extraordinary of circumstances. In the 64th minute, McOnie won a corner and the winger produced a wonderful whipped effort which curled in at the near post in the top corner, catching the keeper completely by surprise.

Hartpury’s joy at drawing level was short-lived, however, when a Myerscough corner caused problems and the ball was eventually bundled home past Cox.

Hartpury continued to press but the Myerscough defence held firm until, in the 89th minute, a foul on Bundu presented another free kick opportunity. Bundu produced a sweetly struck effort which curled over the wall and had the keeper beaten but the ball cannoned back off the post into play.

With seven minutes of injury time to play due to an earlier Myerscough injury, Hartpury continued to throw everything at their opponents. A couple of half chances were created but with time running out it appeared that Myerscough had weathered the storm.

That changed in the final minute of added time. A free kick was lobbed into the penalty area and after a frantic goalmouth scramble, the ball fell kindly to Fogg, who managed to reach the ball before the keeper and direct the ball into the net, sparking huge celebrations.

Hartpury’s tails were up in the first half of extra-time, visibly buoyed by the dramatics moments earlier.

Just a couple of minutes before half-time, Hartpury finally went ahead for the first time in the contest. An incisive through ball from Hicks was latched on to by Bundu and the electric attacker produced a calm finish to guide the ball through the keeper’s legs and into the goal.

Hartpury looked in complete control for the second half of the extra-time period and could have settled the game when Bundu raced clear, but this time he was thwarted by the keeper.

With the seconds running out, the defence had to hold firm against a barrage of Myerscough attacks, as the Lancashire-based college desperately sought to take the game to penalties.

The Myerscough keeper headed into the penalty area for one final free kick, and he managed to rise highest amongst the crowd but saw his header hit the post and the ball was eventually cleared, with the final whistle being greeted by jubilant scenes of celebration from the Hartpury players, coaches and supporters.

Paul Tassell, Hartpury’s junior football programme manager, said: “This was a fantastic final and I have to give credit to Myerscough who were brilliant throughout the game. Neither team deserved to lose this game.”

“To come back from a goal down three times just shows the tremendous character that this Hartpury team possesses and I am so proud of all the players. They deserve this memory and national title after all the hard work they have put in all season. They have produced excellent performances throughout this competition and everybody should be immensely proud of the resilience and team spirit they showed.” 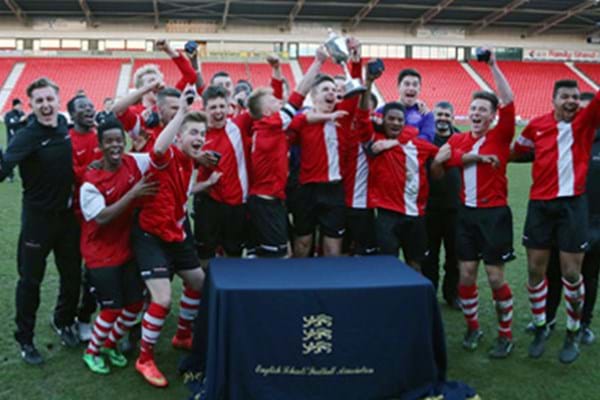