A try in the last play of the game saw Hartpury hit back to 26-26 to take the game into extra-time and, trailing at half-time of extra-time, they fought back again to claim the spoils 34-33, wrapping up a league and cup double.

Hartpury had UoG pinned in their own 22 for the first 10 minutes, quickly going 10-0 ahead with a penalty and a well worked try by the backs finished off by Matt Davies.

While the Hartpury scrum was dominant, UoG capitalised on any mistakes and moved the ball well, with their winger Harry Gooderham hitting Hartpury for two tries in 20 minutes, and they took a 20-10 lead into half-time.

As the second half got underway, the error count mounted from both teams and while Hartpury took advantage of the penalty count to close the gap, UoG also kept the scoreboard ticking over and went into the final 10 minutes 26-13 up.

The pack started to take control under the expert leadership of Ewan Bulger and James Elliot weighed in with a quick score to reduce the deficit to 26-21 with six minutes to play.

From a well-executed restart, pack pressure coupled with the backs running with power and conviction saw Hartpury inflitrate the Gloucester 22 with a minute to go. A brave UoG rearguard effort held Hartpury for a number of phases, but heroic carrying from Ambler, Elliot and Fresher Henry Niblett produced a try in the last play to level at 26-26

Alex Moore, who made the move from centre to outside-half, could not add the extras so the game headed into an extra-time period of 10 minutes each way.

Both teams showed their attacking intentions early on and Hartpury struck first with a Moore penalty. However, a strong line-out from UoG unleashed a powerful driving maul that resulted in a converted try for a 33-29 advantage at the interval.

Nerves were evident from both teams heading into the second period but courageous attacking intent from Hartpury, with Moore and potent carrying force Dobie at the fore, saw the latter brought down just outside their opponents’ 22.

Hartpury’s forwards again turned on the power game only to be held up over the line. Fresher prop Chris Collcutt and Masters student Elliot then delivered a powerful scrum, which was well controlled by Ambler, leading to an unconverted score and establishing a 34-33 lead with three minutes to play.

As UoG kicked deep, Hartpury cleared well and the Hartpury defence stood up well to the late onslaught, forcing a crucial error in the dying seconds to spark jubilant Hartpury celebrations.

Hartpury third team coach, Tom Legge, said: “Credit to both teams, this was a cracking contest befitting a cup final. It’s testament to our lads’ commitment and attitude that they refused to lie down and fought back twice, first to take the game into extra-time and then to win the game.

“Both teams wanted this so badly and everyone out there laid their bodies on the line for the cause but I’m so proud of our lads, who thoroughly deserved to complete this league and cup double after working so hard all season. Their spirit and level of performance has been exceptional.” 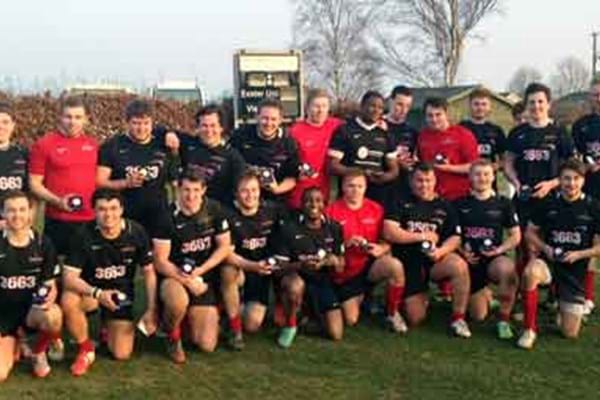