Hartpury were narrow victors in a gripping League One tussle between the country’s two leading university rugby teams.

With three tries apiece, only the narrowest of margins separated the sides at the final whistle although the home side will reflect that, on the balance of play, they might have won more convincingly.

Although conditions underfoot were good, a strong blustery wind ensured that control, in all aspects of the game, was difficult to achieve. Passes were regularly misdirected as players were unable to deal with the frequent gusts.

Despite this, there was enough ambition and enterprise on display to ensure that a decent crowd was fully entertained.

Hartpury, without a game for fortnight, were missing young flyer Mat Protheroe meaning that Alex O’Meara stepped into the full-back slot. They were able to welcome back flanker Joe Dancer, the mobile forward making his first start in months, and his contributions in the line-out and in loose play were notable.

There was an interesting match-up at half-back, where Hartpury’s Scottish U20 international, Ben Vellacott, was pitted against England’s Henry Taylor. Taylor had tormented Hartpury with a hat-trick of tries in the reverse fixture back in November and it was important that the home team were able to limit his influence here.

As it was, with two tries of his own in a sharp all round performance, Vellacott shaded that personal battle, although Taylor was again impressive throughout.

After a bright start from the visitors, running the ball into the wind, it was Hartpury who drew first blood.

A series of quickly re-cycled balls had the Loughborough defence stretched across the pitch deep in their 22 and it was no surprise when quick hands from Will Tanner released lock Rory Bartle to dive over in the corner.

They almost extended the lead minutes later, when Craig Jackson’s inside ball released Dan Thomas to run 30 metres to the line, but referee Lewis adjudged that that the pass had drifted forward on the breeze.

The remainder of the half was frustrating for Hartpury. Loughborough, despite a line-out that barely functioned, enjoyed their fair share of possession and when Hartpury did engineer opportunities they were inevitably thwarted by a lack of control and occasional poor decisions.

A five point advantage at half time barely seemed enough, such was the strength of the wind blowing straight down the pitch.

A lively Hartpury start to the second half saw Loughborough penalised at the breakdown, allowing Gareth Thompson to extend the advantage with a good kick into the breeze, but the difference was back to one point moments later as the visitors opened their account.

Loughborough attacked up the middle and when the ball was moved left, busy flanker Ben Pons was able to step out of an indifferent tackle to score under the posts.

To their credit, Hartpury shrugged off this setback and were next to score after 55 minutes. Good hands from Tanner, again, gave Dancer the opportunity to make significant ground up the touchline. He had the presence of mind to draw two defenders before his off-load out of the tackle found the supporting Vellacott (pictured).

The scrum-half still had work to do, but showed good pace to outstrip the cover to score in the corner.

This time the Hartpury lead was short-lived and it appeared that the half-time fears were about to be realised when Loughborough scored twice in seven minutes.

First, Dowsett claimed the try of the match as a series of off-loads shredded the Hartpury defence and allowed the winger to leave Millett with a simple conversion. Millett then grabbed a try of his own although, critically as it turned out, it was too wide out for the conversion to have much chance in the conditions.

Alex Brown had replaced O’Meara at full-back and shown glimpses of his strong running before creating the winning try six minutes from time. Bursting out of his own half, he chipped behind the visiting defence. Vellacott showed great hands to pick up on the ‘half-volley’ and then had the pace to hold off Will Edwards and go under the sticks.

Forrester’s conversion into the wind was good and Hartpury kept the visitors pinned in their own half as the clock ran down to full time.

This was not a classic performance by any means, but a win against Loughborough is always welcome. Results elsewhere leave Hartpury eyeing their final three fixtures knowing that a strong finish could see them finishing an impressive season in fifth, or even fourth, position. 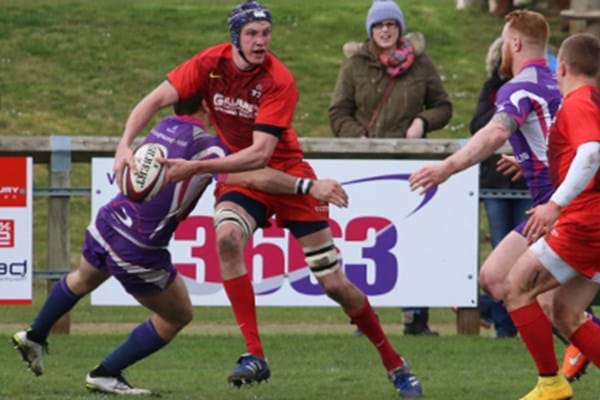