This was a meeting of two sides in good form and separated by just two positions in the higher reaches of the league. We had a glorious, sun-soaked day, marred only by a stiff breeze. We had a reasonable pitch to play on. All the ingredients needed for a cracking game of rugby.

Sadly, what we got was an error-strewn affair in which neither side settled into any sort rhythm and where mistakes proliferated.

Hartpury, fresh from their exertions in training against the full England squad the previous day, looked as though the session had taken its toll. Blackheath, competitive at the breakdown and in the line out, struggled to create anything with the ball in hand and rarely demonstrated the guile needed to break the home defence.

The hosts were fielding a strong side, welcoming back influential centre Steve Leonard from a two-match absence and with all of their recent age group internationals on display.

Blackheath had snatched the previous fixture between the sides in the dying minutes, through a combination of their own forward power and indiscipline on the part of the College.

But Hartpury have come a long way since November – could they reproduce the level of performance that had seen off sides of the calibre of Coventry and Fylde in recent weeks?

Hartpury started brightly and a scrum taken against the head, leading to a penalty, gave the forwards plenty of early encouragement. However, the resulting line-out was lost and the pattern of the afternoon was set.

Indeed, there was no scoring of any kind until the 28th minute, when Blackheath rumbled over via the catch and drive, their excellent flanker Dave Allen credited with the try.

Prior to this they had enjoyed the better of the territorial battle, although there was a strong sense that during the first half they did not make full use of the lively breeze. Like the home team, their handling was all too frequently a source of weakness as the ball went to ground with monotonous regularity.

Hartpury did respond well to the Blackheath try and, after a livelier spell, were level on the stroke of half time.

Joe Batley led the charge out of defence to create good field position. Burton, Gibbons and Tanner all drove closer to the line until, with penalty advantage being played, scrum-half Ben Vellacott put a kick wide into the in-goal area.

The bounce looked to have defeated everybody, before Steve Leonard was quickest to get the final touch.

The second half began just as scrappily before, six minutes in, Hartpury showed a flash of their finishing power.

Blackheath were making ground through winger Jake Lloyd until they lost the ball in contact near half way. Hartpury quickly turned defence into attack. Burton’s pass released full-back Mat Protheroe who made good ground through the midfield.

His final pass was well-timed, giving Steph Reynolds just enough space to squeeze between the cover and the touch-line (pictured) before running around and under the posts.

This time, it was Blackheath who bounced back quickly. Within three minutes Geoff Griffiths had latched onto a neat grubber from fly-half Tom Carlisle to tie up the scores.

Hartpury were starting enjoy the majority of the possession now, despite a line-out that refused to function for most of the game and a continued tendency to drop the ball.

The outstanding moment of the match came six minutes from the end. Apart from his contribution to the Reynolds try, Mat Protheroe had been shut down by the Blackheath defence on each occasion he had tried to find space.

Now, however, he got the ball deep in his own half and with a broken field in front of him. He quickly stepped past two Blackheath tacklers before sheer pace took him sixty metres to the line to wrap up the win.

Hartpury’s record since the end of November now comprises eleven wins and just one defeat, against league leaders Ealing. Although there was a distinct lack of quality in this performance, as least they know they can ‘win ugly’ when required.

Next week the College face a daunting trip to promotion-chasing Rosslyn Park, before the ‘university challenge’ of welcoming Loughborough Students at the end of March.

We would like to thank Blackheath for a match played in excellent spirit and wish them well for the remainder of the season. 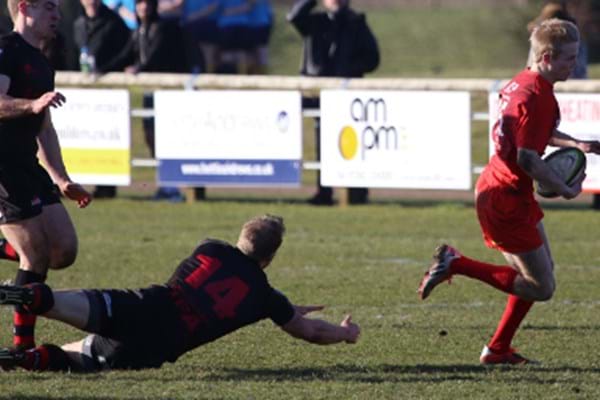