The squad stretched their lead at the top of the table to eight points after goals from Jordan Ricketts, Jordan Fletcher and Callam McOnie secured a 3-0 win.

Hartpury were not fazed by the strong winds that persisted at the beginning of the game, with some intricate play by the midfield setting the early tone and the first chance of the match fell to midfielder Ricketts. After picking the ball up in midfield and beating a man, he cleverly shifted the ball onto his left foot before firing an effort at the keeper.

Hartpury were ahead shortly after, when left winger Sam Hicks saw his deflected shot hit the post and Ricketts was there to tap in the rebound.

With Hartpury’s skilful football on the floor and Jordan Fletcher’s hold up play bringing others into the game, Ricketts once again nearly doubled the scoreline. Fletcher laid the ball off to Ricketts on the edge of the box, and with his weaker foot, he rifled a strike that had the goalkeeper well beaten, but cannoned back off the post.

Ricketts was having a prominent first half and another long range effort saw the opposing goalkeeper produce a brilliant save.

Hartpury almost doubled their lead late in the first half as winger Sol Wheatley got behind the full-back and delivered a teasing cross into the penalty area, finding striker Fletcher who couldn’t quite provide the finish.

Brooke House’s best chance of the first half came from a set piece close to half time as an effort from range clipped the top of the bar.

The second half began much the same as the first, with Ryan Shaw and Will Haines controlling the pace of the game from midfield and creating opportunities.

Hartpury wrapped up the game late on as McOnie, who made a telling impact as a substitute, produced a mazy run down the right hand side, beating multiple defenders on his way to squeezing an effort past the goalkeeper at his near post. 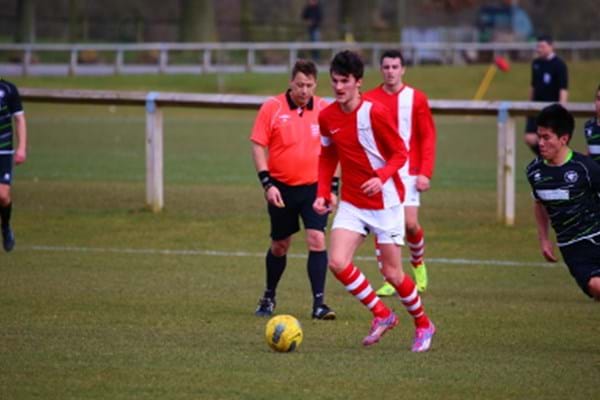