It was a tough day at the office as, for the second time this season, Hartpury found life difficult when faced with the power and direct running of promotion-chasing Park.

Although there was no lack of effort and commitment on the part of the College, they were taught a lesson about life in the higher reaches of the National Leagues, being outscored six tries to one.

The game was a meeting of two styles. Hartpury, committed to playing with width, often found themselves running into blind alleys whilst the more pragmatic Park regularly launched their big runners close to the fringes or straight down the middle to good effect.

Clearly, any approach is dependent upon having the right personnel and, in skipper Hugo Ellis and powerful centres Kiba Richards and Mark Ireland, Park had exactly the type of weapons they needed to test the Hartpury defence.

Although the game was always going to be a major challenge for the young Hartpury team, there was plenty of pre-match optimism.

Conditions were good. After several weeks of heavy pitches, Park’s Roehampton ground offered a firm, dry surface on a cool but clear afternoon.

Hartpury’s team selection also looked strong. Although young flyer Mat Protheroe was not available due to his commitments with England Under-18s, Hartpury were able to welcome back from injury influential flanker Dan Thomas.

Additionally, they were able to name big lock forward Elliott Stooke (pictured, with Dan Thomas), making his first appearance for the College since 2013, and scrum half Ben Vellacott, who had made the journey down from Darlington after his cameo appearance for Scotland U20 the previous evening.

On the down-side, several players were facing their second big game in the space of four days, having been involved in the British Universities semi-final earlier in the week.

The first quarter was a breathless affair. Hartpury opened the scoring when a powerful shove at the first scrum drew a penalty, Gareth Thompson collecting three points.

Thompson kicked another penalty, again awarded at the scrum, before, in the 10th minute Park added a second try in dubious circumstances.

An attacking line-out resulted in the inevitable catch and drive. There was no question that Park had the momentum to score, but it was equally obvious that flanker Sam Shires lost the ball forward as he crossed the line.

Apparently, though, referee Davies and his assistant were the only people in the ground not to witness this as, after a short consultation, the try was awarded.

Hartpury had the character to hit back quickly. With 17 minutes on the clock, outside half Mitch Burton launched a well-weighted cross-kick into the Park in-goal area.

Under pressure from Gareth Thompson and Jaike Carter, full-back Kilmartin could only knock the ball forward and Thompson was first to recover for the try. Although we did not know it, that was to be the last of the Hartpury scoring for the day.

Hooker Adam Bellamy added another driven try for Park before the end of a closely-contested first half, to produce a 17-11 scoreline at the break.

Into the second period and Hartpury started brightly, arguably enjoying their best spell of the match. Dan Thomas was prominent in much of what Hartpury did well, with Elliott Stooke also making some strong carries.

But it was Park who did all the scoring. After 54 minutes, scrum half Luke Carter was allowed to run a long way from the base of a scrum and replacement forward Will Bowley was on hand to dive over.

As the students started to tire, Park’s runners began to enjoy themselves. After a protracted injury delay to Park prop forward Liffchak, number 8 Hugo Ellis was able to round off his good afternoon with two further tries, the first from a pushover scrum and second from a typical barrelling run.

Hartpury will be disappointed with this result, but will be realistic enough to know that taking anything at all from ‘The Rock’ was always going to be a tall order, particularly with the heavy timetable of student and age group rugby at this time of year.

The focus now will be on finishing their good season strongly, starting with the visit of Loughborough students at the end of the month.

We would like to thank Rosslyn Park for their warm hospitality and wish them well for the remainder of the season. 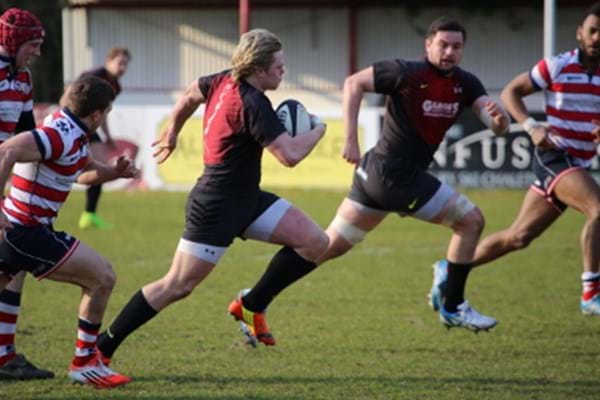