The Hartpury RFC players are still “buzzing with excitement” after being given the chance to test themselves against England Rugby today.

A squad of 25 players and the RFC’s coaching staff left Hartpury early this morning to take part in a training session with Stuart Lancaster’s senior England side at Pennyhill Park. After a light breakfast and a briefing from the England head coach, they were put through their paces by England and Hartpury’s coaching staff.

England used the session to prepare for their Calcutta Cup clash with Scotland on Saturday, March 14th – the penultimate game in their RBS 6 Nations campaign.

And they came up against a number of Hartpury RFC players looking to follow in their footsteps in future, including England Under-20s back or second row Joe Batley, and fly-half Mat Protheroe, who put in a man of the match performance for England Under-18s recently, scoring 11 of their points in a 21-5 victory over France.

Hartpury Director of Rugby, Alan Martinovic, said: “Our guys absolutely loved it! It was a beautiful morning and that made it all the more physically demanding, but we were able to rotate the players around to share the workload and they are still buzzing with excitement about it.

“Coaching wise, it was great for us to be able to talk to the England Rugby coaching team and wider support staff and share our challenges and experiences. Our physio, Charlotte Lodge, also got the chance to pick the brains of the England medics, which was fantastic for her.

“As a squad, I think we stood up pretty well and Stuart Lancaster and Mike Catt were both complimentary about the skills of our boys and the shape of our team. It was an incredible opportunity for our players to be able to test themselves against players of that calibre.

“It might have been a training session but you’re still up against the best players in the country and that’s a demanding exercise. It’s an experience these players never thought they would have and I’m sure it will have lifted them ready to take on Blackheath tomorrow.”

Hartpury RFC will head into that home clash with Blackheath (2.30pm kick-off) looking to extend their recent run of good form, having won nine of their last 10 league outings to sit sixth in National League One.

There’s also a busy week ahead for Hartpury’s university and college rugby teams with both facing semi-finals in the BUCS and AASE Championships on Wednesday (11th March).

Director of Elite Sport at Hartpury and former England Rugby captain, Phil de Glanville, said: "We’d like to thank England Rugby for giving our squad the opportunity to train with them. So many of our talented young rugby players are working hard to one day have the opportunity to pull on an international jersey like so many Hartpury products have before them; and today’s trip to Pennyhill Park will be an inspiration to them.” 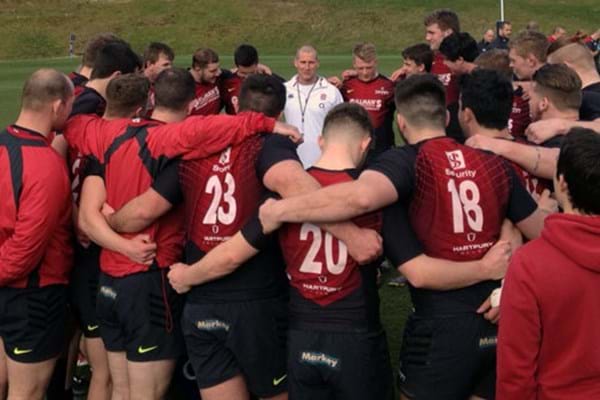