Tournament rules dictated that each group game ending in a draw is decided by a penalty shoot-out and after playing out an entertaining 2-2 affair, Hartpury eventually fell 5-3 on spot-kicks.

Striker Mustapha Bundu scored another brace, taking his tally to five goals in three games, but the side unfortunately came up against an inspired goalkeeper in the shoot-out.

Despite the exit from the international tournament, Hartpury finished the competition with an admirable record of nine goals scored and just four conceded after two wins in their first two games against Greece and San Marino, a 5-2 and 2-0 win respectively.

The College was selected to represent the English Colleges FA (ECFA) at the major international youth tournament, and the squad now returns home with the English Schools’ Football Association (ESFA) Boys Colleges Trophy final against Myerscough College in their sights.

Paul Tassell, Hartpury’s junior football programme manager, said: “This has been a fantastic development opportunity for the players to learn how to play against different footballing philosophies and in a tournament format. These experiences will help them improve further in all aspects of the game.

“For the team to be undefeated in three games and the highest scorers in the group phase is an outstanding achievement. They have been a credit to ECFA and Hartpury College. We would like to thank the ECFA for this opportunity to represent England Colleges and we hope they are more than happy with our contribution to the tournament.” 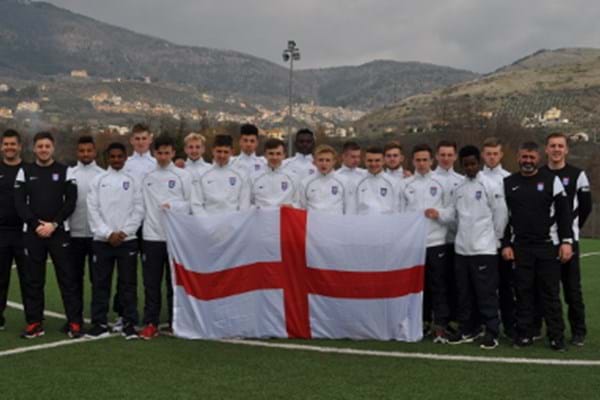