Strachan have proved to be a well drilled side that are capable of scoring goals and they were always going to be a dangerous threat.

In the opening stages, the game was a bit edgy in the middle of the park with both sides feeling each other out and few opportunities being carved out.

A moment of sheer class, however, saw Mustapha Bundu pick up the ball on the left and raced down the wing, cutting inside with great footwork and slotting past the onrushing keeper into the far corner of the net.

The early goal seemed to settle Hartpury’s nerves and they were content to surrender the bulk of possession to Strachan, who struggled to make it count. Both Ryan Shaw and Sirdick Grant were fantastic in breaking up the play and protecting the back four, while Sam Hicks was busy around the park for the entire game.

Hartpury definitely had the better of the chances in the first half with Bundu going close again. He robbed the defender of the ball on the halfway line and ran at the centre half, beating him for pace and just toe-poking the ball wide - a real let-off for Strachan.

Soon after, a diagonal ball found Jordan Fletcher, who brought the ball down and dinked the keeper, but the goal was ruled out as he was adjudged to have handled the ball in the build-up.

The second half was a much closer affair as Hartpury were rocked by losing three players to injury in Grant, Shaw, and Fletcher.

Harvey Rivers was needed to pull off a fantastic save from a header into the top corner from Strachan’s captain.

However, the real turning point came when Strachan’s substitute ran hard at Hartpury’s defence and was felled inside the box. He got up, brushed himself off, and powered his penalty straight down the middle, but Rivers smothered the ball under his body and Strachan’s heads dropped.

Right midfielder Sol Wheatley had the task of playing up front by himself due to Fletcher’s injury - an unusual position for the winger – but he excelled.

Challenging for every header, holding the ball up, and bringing others into the game with great footwork, Wheatley made himself a big problem for the centre halves. He held the ball up and set it to substitute Jordan Ricketts, whose weight of pass for Bundu was fantastic. Bundu rounded the keeper with good feet, but a brilliant last ditch challenge from the Strachan centre half meant that the score remained at 1-0.

Soon after though, Strachan had a throw in deep in their half and the ball went back to their centre half. As the ball got stuck under his feet, Ricketts pounced, nicked the ball and coolly slotted past the goalkeeper.

Hartpury were unlucky not to make it 3-0 as Ricketts burst past Strachan’s left back, drove to the by-line and cut the ball back to an arriving Wheatley, who was unlucky not to have capped a fine second half performance with a goal as the keeper smartly saved his shot. 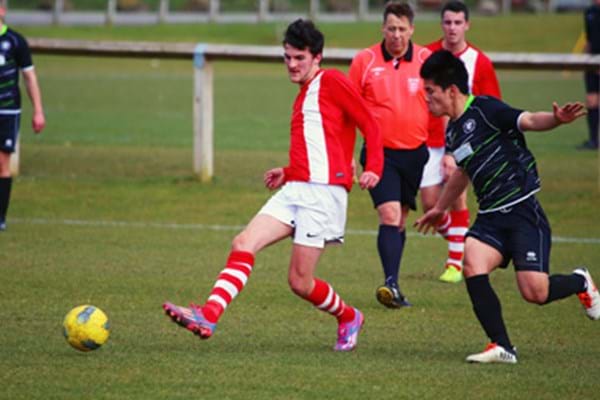