Remaining unbeaten all season, this sublime performance was a seemingly fitting reward for the team’s hard work over the course of the season, and once again proved their AASE league dominance.

Tagged favourites before the game, Hartpury racked up a half-century of points scoring seven unanswered tries and 15 points through the boot of centre Robbie Faulkner. In a ruthless Hartpury team display that included both physical and tactical superiority, Filton were unable to unearth their own brand of attacking, running rugby that had seen them cause upsets all the way to the final.

It was an untypical shaky opening few minutes for Hartpury as Filton applied pressure following fly half Matthew Protheroe’s charged down kick, coupled with Hartpury being penalised for their inaccuracy at the breakdown as a fired up Filton reacted quicker.

Hartpury finally settled on the 15 minute mark, after a mazy run to return a loose kick from winger Harry Robinson. Protheroe fed captain and flanker Sid Blackmore who crashed over in the corner with a powerful carry. The extras were missed.

Gaining confidence from the first score, Hartpury began to control the game with authority. A second try soon followed, Blackmore’s destructive back row partner Zac Xiourouppa getting the finishing touches on the back of a rampant driving maul. Faulkner hit the post with a tricky conversion from wide out.

Executing well-constructed exit strategies Hartpury found good territory deep in the Filton half. Now disciplined at the breakdown, Sean Marsden’s side won three penalties which were all converted into points by Faulkner to give Hartpury a deserved 19-0 half-time lead.

Despite their commanding lead there was no letting off for Hartpury. After claiming the ball from their own restart a bobbling ball allowed Faulkner to burst through a gap, quick ball was recycled and scrum half Myles Churcher burrowed over. Faulkner duly added the extras.

Hartpury’s next score oozed patience and precision. Spreading the ball to one touchline through centre Robbie Smith before multiple phases saw Robinson finish on the opposite side of the pitch for a great team score to take the score to 31-0.

Despite changes to both teams there was zero effect of the pace of the game. Smith bagged a try of his own crashing over after incepting from first phase, while replacement number 8 Gareth Jones showed great strength to muscle over in the process of cleaning up Filton scraps.

Chanted home by noisy travelling classmates the last act of the game was to fall to the classy Protheroe, outpacing three Filton defenders in an obligatory long range effort from 70 metres out, Faulkner’s conversion brought the final score to 50-0.

Captain Sid Blackmore was delighted with to finish the season on a high “The boys have been faultless all season with their performances and we are over-the moon to back it up with a win today to retain the AASE title.”

“We have put a lot of hard work in over the course of the season both on and off the pitch, working closely with the all the coaches and we are delighted it showed today.” 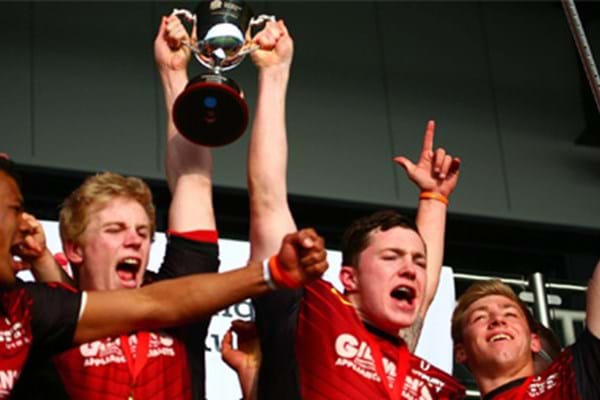