How do you prepare a man to swim 2000 miles in shark-infested waters, facing deadly jellyfish and 30 feet waves? That’s the challenge facing a quartet of Hartpury staff.

Hartpury’s Richard Collins, Tom Cresswell, Ben Drury and James McCarron, are the Sports and Exercise Team behind Cheltenham man Ben Hooper, who is preparing to become the first person to swim the Atlantic Ocean from Africa to Brazil.

Ben will be swimming front crawl for up to 12 hours a day when he starts his ‘Swim the Big Blue’ adventure in November 2015 in Dakar Harbour in Senegal. The epic 90-day swim will take him through 30-foot surges in shark inhabited regions and he will encounter jelly fish, flying fish and a harsh Equatorial sun. He will also swim through “The Doldrums” – infamous for their stillness and humidity – and not forgetting the prospect of raging storms!

Should he meet a smack of jellyfish, he could be forced to wear a ‘stinger suit’ to minimise the effect of stings and he will be equipped with a ‘Shark Shield’ device, which emits low frequency electrical fields. The support boat will also be equipped with a counter-shark device and shark-safe chemical repellents.

The man charged with making Ben mentally strong enough to face this challenge is Chartered Sport and Exercise Psychologist, Richard Collins, who is head of Sports Psychology at Hartpury. He has experience of working with Great Britain athletes and international sportsmen and women in a range of sports.

He said: “The swim will be a huge test of Ben’s mental as well as physical endurance and it’s my job to give him and the team all the psychological tools and the support they need to complete such a monumental expedition.

“Ben will face difficult and dangerous conditions, not to mention overwhelming fatigue and, although he’ll be supported by a crew, contact with them will be minimal. Being effectively alone for two months or more is a huge psychological barrier to overcome and in-depth mental and physical preparation will be vital to his success.

“We’re monitoring Ben’s heart rate, sleep patterns and emotional state on a daily basis and I’m trying to find his breaking point – that’s something you have to practice!”

The swim will be broken down into two six-hour periods with two hours of rest on the support boat in between. Ben will be faced with sea temperatures ranging from 20 to 30 degrees centigrade, with currents from one to seven knots.

Head of Physiotherapy at Hartpury, Tom, said: “Our job is to help Ben to build a body to achieve his goal of becoming the first man in history to swim the Atlantic in full. He’ll need to be supple and be physically ready for every mile. We’ve done some screening to see what areas we need to prioritise and we’re constantly tracking his progress.

“This will be a gruelling trial of endurance and the focus will be on building robust shoulders and a torso that doesn’t waste energy. An efficient stroke will then support the engine that will be fine-tuned by strength and conditioning.”

Ben Drury, a university lecturer in Strength and Conditioning at Hartpury, has an extensive background of training and preparing athletes and teams in endurance sports. He is also a former national standard swimmer.

He said: “James [McCarron] and I are already working very closely with Ben to ensure he’s in the best physical condition for the swim. He could be burning up to 12,000 calories a day so it is vital he is fully fuelled and hydrated to ensure his body stays fit and healthy.

“We’re providing Ben with a daily programme via online software, which is updated automatically by Ben’s watch when he completes his session. This allows us to keep on top of how he is doing, monitor pace and adjust daily sessions as necessary.”

Ben Hooper said: "The Swim the Big Blue expedition is without doubt the biggest challenge I have ever faced. Nobody has ever attempted to swim every single mile of the Atlantic before; perhaps for good reason!

"It will test my abilities and levels of endurance to the absolute limit. Nevertheless, I am on a mission to prove that nothing is impossible and the support of Richard, Tom, Ben and James at Hartpury has been invaluable in preparing me, both physically and mentally, for what lies ahead."

Next up for Ben and his support teams are a series of training camps. Currently training in Key West, there is another camp at Lake Windermere later this month. They then head to America again in May and, in August and September, Ben will swim from Rome to Sardinia. 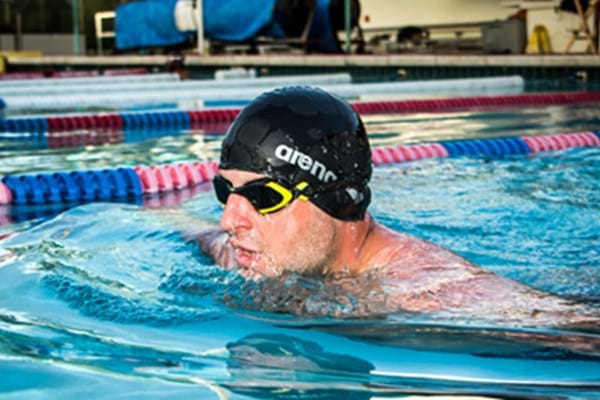