Twenty of the county’s primary schools took to the rugby pitches at Hartpury College yesterday in a major tag rugby tournament showpiece.

After 47 games of enthralling rugby from all teams, the final game of the day saw an 11-try thriller between Heron Primary School and Twyning Primary, with the former winning 6-5 to be crowned champions of the county.

Maryam Boulkenafet, 11, who attends Hempsted Primary School, said: “I really like playing rugby! I like playing with my team and trying to do as well as I can.”

Finley Hyett, 11, from the winning primary school, said: “I really enjoyed playing and having fun today! My favourite part is running for the ball and tagging the other player.”

The tournament was planned and organised by Hartpury students in conjunction with Active Gloucestershire, with BTEC Level 3 Diploma Rugby students refereeing, touch judging and stewarding the event as part of their course.

Alun Richards, a sport lecturer at the college, said: “It was a great day, with all of the children looking like they had a fantastic time! The students have been learning about how to organise a sports event so to play a part in planning and then helping to run this tournament is really beneficial.

“All of the schools commented on how well the event was run and how professional the students acted throughout the tournament. Hopefully this will now become an annual event on our calendar.”

Hartpury also has four students involved in the Youth Sport Trust School Rugby Ambassadors programme, whose aim is to generate engagement in rugby for schoolchildren across the country ahead of this year’s Rugby World Cup.

Owen Smith, Charlotte Pye, Harrison Clutterbuck and Jack Combes, who are students on the rugby programme, have been given the mission to build excitement across the county heading into the tournament this Autumn, with the tag rugby finals their first main project.

Jack, 17, said: “The lecturers at the college mentioned the programme to me and it is a great opportunity to get involved in the rugby community and help to promote youth rugby.

“I love the game and cannot wait for the World Cup so for me it’s a great thing to be involved in.”

The fun-filled day signified the start of Hartpury’s Rugby World Cup celebrations as the college prepares to welcome the Webb Ellis Cup on July 15th as part of its three-day tour of Gloucestershire, while also getting ready to host the Scotland and USA national teams as an official ‘Team Base’ during the competition. 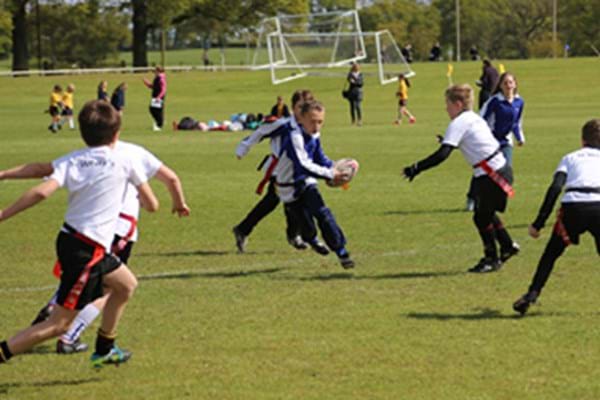