Gloucester-Hartpury women’s rugby team rounded off a successful season with a narrow 33-31 loss to Bath Ladies at Kingsholm, despite a spirited second half fightback.

Fresh from their historic Junior Cup victory, which was paraded in front of the Kingsholm faithful at half-time of Gloucester’s thrilling 42-40 win over Newcastle Falcons, it was Susie Appleby’s side who opened the scoring.

Neat interplay and a quick tempo created the opening for number eight Zoe Aldcroft to cross the line, a score that Emma Mundy converted.

Bath, a squad that have been together for much longer than their younger Gloucester-Hartpury opponents, hit back impressively with a double score from both wingers in either corner.

As possession changed hands at a rapid rate, the Gloucester-Hartpury backs continued to thrive off a strong platform, and added a second try when a strong carry from Aldcroft from the scrum saw Kelly Smith run in from half way, and with Mundy off target from the tee, the home side trailed 14-12 at the turnaround.

Gloucester-Hartpury found themselves on the back foot at the start of the second half, and continued pressure allowed Bath to score twice.

It looked to all be going the way of the visitors, but good awareness from captain Stacy Hardie intercepted in midfield, and via Aldcroft, centre Chloe Barton raced over, Mundy converted to make in a seven-point game.

Jade Shekells was lively throughout, and sent the home crowd into celebrations as she skipped her way through the Bath defence a few minutes later, and despite Mundy's missed conversion, the score was 26-24.

It was an end-to-end game with both teams thriving on the vast expanses of the Kingsholm pitch, and Bath scored again as direct work from their pack saw them cross again. But again, Zoe Aldcroft responded as the game entered the final ten minutes.

The closing stages were frantic as Gloucester-Hartpury had plenty of possession but couldn't find the scoring pass and capitalise and the Bath Ladies held on to take a 33-31 victory.

Susie Appleby was full of pride for her team after an outstanding debut season;

"The game rounded off an impressive season for us, having only lost narrowly to Bath Ladies and Supermarine, and highlighted in winning the Junior Cup.

The future is bright as the team pushes on into the league next season." 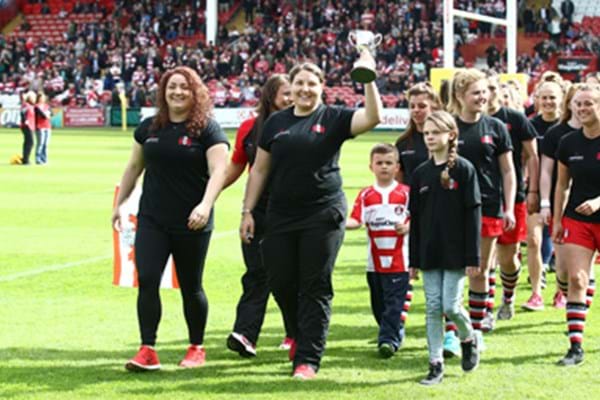