Hartpury’s Under-19s have progressed into the semi-final of the ECFA Premier League play-off stages with a 2-1 win at home to Milton Keynes College.

They will now take on Liverpool FC Foundation College in the last four, with the clash likely to be played on Wednesday, April 29th at Hartpury (date and time TBC). The college is now eyeing an historic treble, having already secured two national titles this season - the English Schools Football Association (ESFA) Boys Colleges Trophy and the British Universities and Colleges Sport National Championship.

Despite Hartpury controlling the quarter-final throughout and taking the lead on the 30th minute with a Nathan Summers penalty, the game lacked the usual edge of a quarter-final; that is until the game was sparked into life in the last five minutes after a superb Milton Keynes equaliser was matched with a Mustapha Bundu winner. This piece of individual brilliance clinched a dramatic Hartpury win.

In windy conditions, both teams used the opening exchanges to settle, often resorting to playing long, threatening passes forward to apply pressure on the opposition with no clear cut opportunities on goal carved out.

The first chance fell to winger Bundu, on the left flank, as his quick pace and feet saw him beat his opposite man with ease before firing over the bar.

Hartpury then began to dominate, winning clean headers at the back through centre-back Summers and looking to move the ball forward with poise. Providing no threat in open play, Milton Keynes’ only chance of the half came from a set-piece with poor marking from Hartpury leaving the Milton Keynes striker to head over the bar.

On the half-hour mark, striker Jordan Fletcher fed Bundu in acres of space and, attacking with pace, he knocked the ball past a helpless defender, forcing a foul for a clear penalty.

Consulting with his linesman, the referee awarded a penalty after first judging the foul to be outside the box. Summers sent the keeper the wrong way from the spot, calmly converting into the bottom right corner.

Hartpury’s lead was nearly doubled before half-time with Bundu hitting the outside of the post after curling the ball around the wall from a free-kick on the edge of the box.

The first 20 minutes of the second half followed in the same fashion as the first, with both teams struggling to provide any impetus or create any goal-scoring chances.

Looking to push on and get another goal to steady the nerves, Hartpury brought on fresh legs in the shape of Sol Wheatley, Callum McOnie and Abdul Ganiyu.

Hartpury did have chances to seal the victory, firstly McOnie’s final pass was intercepted when a Hartpury counter-attack looked threatening and then Wheatley’s shot was deflected over the bar after he found space inside the box.

With five minutes remaining, Milton Keynes shocked Hartpury as they conjured up a fine equaliser to reward their hard work throughout the game. A long diagonal cross across the box and over the last Hartpury defender found their central midfielder, who chipped the keeper from a tight angle.

With the threat of extra-time looming, Hartpury showed urgency. Bundu pressured the Milton Keynes defence before winning the ball back and breaking into the Keynes box. Pulling the trigger, he curled the ball into the top far corner of the net to clinch a deserved victory for Hartpury.

Paul Tassell, Hartpury’s junior football programme manager, said: “Despite only being 1-0 up for a long part of the game, I thought we were always in control and we deserved the win. We had the lion’s share of the chances and, on another day, would have converted more of them and made it a more comfortable afternoon.’

“To hit back with a fantastic goal like that within minutes after conceding was great for the team and shows the character they have. It will give us a big confidence boost going into the semi-final.” 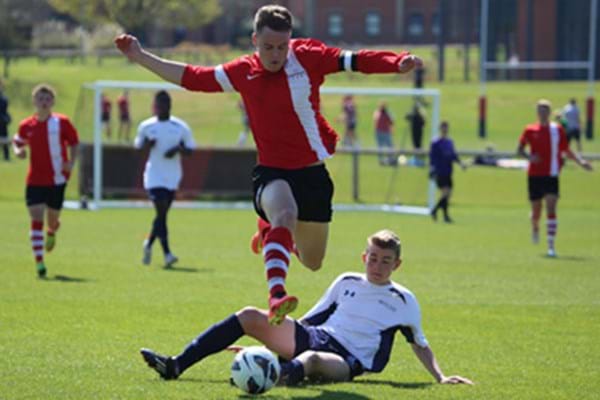