Hartpury’s growing animal collection has a new sting in its tail after the college’s scorpion gave birth to a nest of 14 little scorplings.

The pregnancy came as something of a surprise to Hartpury’s animal team given that the female Emperor scorpion (Pandinus Imperator) is our only scorpion! At Hartpury for the last six to seven months, she must have mated just prior to her arrival as the gestation period lasts for seven to eight months in this species.

It’s probably just as well for her romantic partner, however, that he didn’t stick around as female scorpions are known for eating the males, especially when pregnant or after giving birth!

If there is a shortage of food and/or space, the female will kill the male to ensure she has enough nutrition or to ensure her offspring survives along with her. Unsurprisingly, in the wild, males leave the mating site and the female almost immediately after copulation!

The Hartpury staff are still making sure mum is happy and well fed though, as these cannibalistic creatures will also kill some of her offspring if she feels there’s not enough resources to go round. They can only be separated from the mother when they have moulted and even with conditions are optimal, it is unlikely that all of them will survive.

Aleksandra Lipinska, who works in Hartpury’s animal collection, said: “Even when there’s plenty of food and conditions are optimal, many of the baby scorpions will die.

“The students are really excited about having a female scorpion and her new offspring to observe. It’s a pretty unique opportunity for them.

“They are always surprised when they first see the babies as they are white and look pretty strange! They become darker when they moult and when they are away from their mum, we will be looking at getting the students more involved with their care and management.”

Scorpions tend to have a litter ranging in size from 15 to 40. The young grow in the mother, are born live, and then will climb on to the mother’s back. The mother scorpion will feed her young by killing an insect and leaving it on the floor of their enclosure. The baby scorpions will then descend from the mother's back and feed on the dead insect. 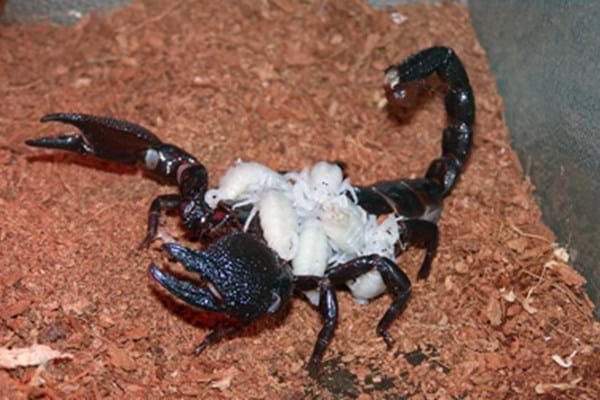