Hartpury's Yasmin Ingham has set her stall out as one of the finest young eventing talents in the country after winning the British Equestrian Federation’s national Under-21s class at Weston Park Horse Trials.

The 17-year-old stormed to victory in the Open Intermediate Under-21s class, producing a near flawless display riding Imperial Cavalier, who has previously competed at 4* level and at the Olympics.

The win puts her in a strong position to qualify for the 2015 Junior European Eventing Championships, which take place in Poland from August 12th.

In second place after the dressage section with a score of 24.6, the Hartpury student propelled herself to the top of the leaderboard with a clear round in the showjumping stage and then produced a strong 1.6 cross country showing to give her a wining total of 26.2.

Yasmin, a 2* eventer who is part of the World Class Development Programme, is currently on the AASE Equine Advanced Apprenticeship in Sporting Excellence (AASE) provided by British Dressage and British Eventing and run exclusively at Hartpury.

The apprenticeship is putting talented young riders based all over the country on the right path to succeed at the very highest level with the support of mentors who have played a starring role in the equestrian world – as competitors and coaches.

Yasmin’s mentor on the AASE programme, the current British Pony Eventing Team coach who represented Great Britain as a rider three times, Jonquil Hemming, said: “This was a great performance from Yasmin, who has shown really good form all season to be rewarded with this league success that sets her out as among the best young eventers in Britain.

“If she maintains this level of performances, she’s in a great position to secure her place in the European Championships squad.”

At the same championships, Joshua Hill achieved three second places and a fourth place, missing out on first place riding Bewunder in the Albion Medium Restricted Championship by only 0.09% with a score of 67.75%.

Anna Horton, from the Equine Academy, who is studying for a Foundation degree in Sports Coaching at Hartpury, put in an exceptional performance to finish fourth at the Bicton Arena international. Riding Barones II in the International Intermediate 2*class, she achieved a dressage score of 38.7, a clear round in the showjumping and a cross-country score of 10.8 to finish with a tally of 49.50 overall. 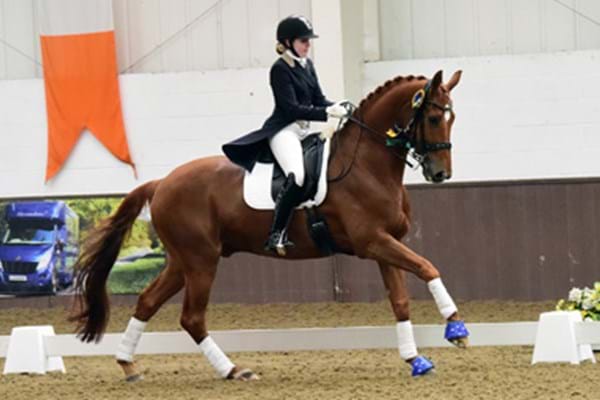