It was at times a somewhat frantic affair in St Albans as an Old Albanian side who are currently sat in the drop zone of National League one showed a lot of heart but not a lot of conviction when it came to protecting their league status.

Hartpury looked as though they were going to inflict some real first half damage as they scored two quick tries inside 10 minutes both coming from strong running efforts from Vellacot and Reynolds respectively. Vellacot the beneficiary of a scything run from Leonard managed to find his way around the outside of the fairly thin Old Albanian defence and touch down for the first points, whilst Reynolds picked up a beautifully chipped ball and showed a turn of pace that no one was able to match. Both efforts made the top up job easy enough for Thompson and it all but looked like this was going to set the tone for the day.

To the credit of the hosts they kept their heads up and responded in kind with two tries from number 8 Matt Lunnon on the 30th and 32nd minute and a 35th minute try from number two Brett McNamee put them in front. It was most definitely game back on for the Hertfordshire outfit. A 39th minute try from Dan Thomas should have seen things all but square but deep in injury time Old Albanian turned the screw, as they managed to rumble over in the corner, just a little too far out of their kickers comfort zone to convert. Half time score 24-19.

What came after the break could have been nothing but a very unpleasant surprise for the hosts as Hartpury came out of the blocks like a startled cat. Sublime vision from Vellacot released Reynolds to run uncontested for 40 metres and put down the first points on the 49th Minute which was again improved by Thompson.

The second try was more of a solo effort as Gareth Thompson collected his own chip through and had fairly leisurely stroll to the goal line, making sure he didn’t give himself any additional work to add the extras.

The third try of the half required a bit more physicality from Hartpury as a catch drive saw Elliot Stooke manage to squeeze over the line right by the flag making it the second kick of the day that Thompson couldn’t capitalise on. Two more tries from Reynolds and Leonard were both improved by Thompson, by which point the game was well and truly won with all five points in the bag for the visitors.

Old Albanian did have something to cheer about as Dom Regan went crashing over in the 78th minute but the applause was soon muted as James Voss managed to grab the final word as he found himself in open space on the right side of Tom Aisles offload and put the game to bed.

Hartpury are now looking to continue their run of form with a home win against Blaydon next weekend and climb towards fourth position before season end. 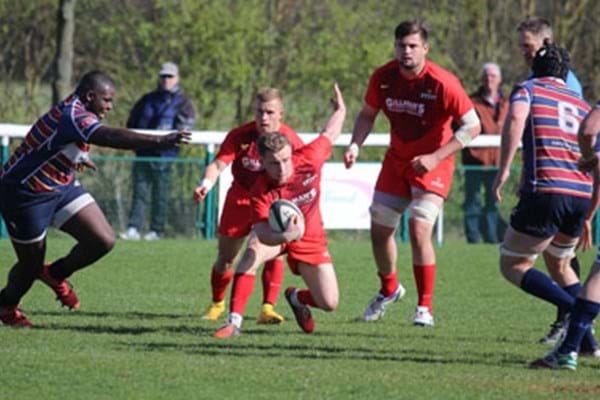