Hartpury remain on course for an historic hat-trick after the college’s junior team landed a spot in the final of the English Colleges Football Association National Championships play-offs with a hard-fought 2-0 over Liverpool FC Foundation College.

They will now face either Football Academy of Bisham Academy or Monkseaton in the final showdown at Notts County’s Meadow Lane on Wednesday, May 13th (3pm kick-off).

They will be aiming to complete a treble of successes, having already secured two national titles this season - the English Schools Football Association (ESFA) Boys Colleges Trophy and the British Universities and Colleges Sport National Championship.

In a semi-final in which both teams missed chances, a fired up Hartpury team were unlucky to only be 1-0 up at the break, while Liverpool will regret not converting a penalty along with several other clear cut chances before Hartpury doubled their lead to make victory certain at the death.

In a hugely anticipated clash, Hartpury welcomed the Merseysiders to Gloucester with conditions proving perfect for an entertaining spectacle.

Playing in their reverse strip of yellow, Liverpool started the game off colour. Hartpury, looking to capatilise on this, went close after striker Jordan Fletcher cut inside from the byline and struck a powerful shot which was saved at the keeper’s near post.

With 15 minutes on the clock, the chances started to come thick and fast for Hartpury. First Fletcher headed over from 10 yards out, then winger Sam Hicks started to cause havoc down the right, curling a shot past the far post before finding Fletcher free in the box who shot just over the bar.

Liverpool’s first chance came 25 minutes in, when a long ball from a free-kick caused trouble in the Hartpury penalty area and keeper Harvey Rivers spectacularly blocked a shot destined for the goal.

Hartpury struck first when Fletcher received the ball with his back to goal before turning and finding room to shoot, firing the ball into bottom right of the goal from the edge of the box and giving the keeper no chance.

Minutes later, Hartpury worked danger man Mustapha Bundu into the game by taking a quick free-kick on the edge of the box. He beat his man with pace before poking the ball inches wide across the face of goal.

Liverpool stepped up their game early on the second half; the introduction of their pacy right winger causing Hartpury particular problems. After 10 minutes, the Liverpool winger found himself running into the box only to be clipped from behind by Hartpury defender Chris Greene and the referee awarded a penalty.

A crucial moment in the match saw the game sway in Hartpury’s favour as Rivers dived low to his right to stop a tame penalty from the Liverpool centre-back.

Minutes later, attempting to make up for his penalty miss, the centre-back hit the top bar with a well struck free-kick that curled up and over the wall.

This marked the start of an assault on the Hartpury goal as Liverpool began to bombard them with crosses into the box. Hartpury, working hard in defence, held firm at the back.

Now playing on the counter, Hartpury had chances of their own. Replacement Sol Wheatley was unable pick out a red shirt and Hicks came close again after his shot skimmed the woodwork following on from a typical weaving run infield.

In the dying minutes, Liverpool had arguably their best chance of the game to send the game into extra-time. Breaking down the right, a perfect low cross into the box found their striker in space, who scuffed his shot wide, much to Hartpury’s relief.

Deep into injury-time, Hartpury broke out of defence. Hustling in the penalty box, Wheatley forced a foul from the Liverpool keeper. There were no mistakes from the spot as centre-back Nathan Summers calmly slotted home to send Hartpury into the final.

Hartpury’s junior football programme manager, Paul Tassell, said: “The boys came through a really strong test in this game and that will be perfect preparation for the final. We didn’t take our opportunities, especially in the first half, and kept them in the game. We came through it though and that highlights the character of the team.

"It’s been an exceptional season already with this team having secured the ECFA Premier League title and a final win would be the icing on the cake. The boys are fired up at the prospect of completing a treble of national wins for Hartpury, which would be a first for the college, and we’ll be doing everything we can to make it happen.” 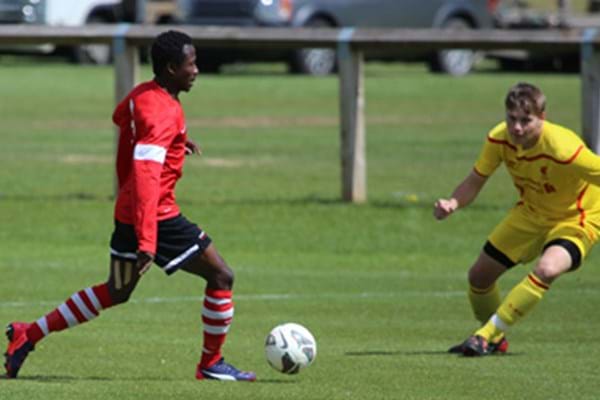