Hartpury’s season ended as it began, with defeat to Wharfedale. Unlike the earlier encounter, when Hartpury were spirited despite suffering an early red card, this amounted to something of a hiding as, for the only time this season, they failed to register a single try.

There are few excuses for the outcome or the scoreline, although some mention must be made of the performance of the referee, Yorkshire-based Jamie Leahy, which was so consistently in favour of the home team that even the partisan home support felt able to openly laugh about it.

It was hard to find an explanation for his bemusing interpretation of the laws, particularly at the scrum, the majority of which ended with a Wharfedale penalty or free kick (accompanied by some indecipherable hand gestures from Leahy) despite the fact that they were often in reverse.

A penalty count of around six to one in favour of the home team tells its own story. This might be expected (at a stretch) in a game where one side was genuinely ‘under the cosh’ for 80 minutes, but that was not the case here, where Hartpury dominated the line-out and were largely comfortable at the scrummage (below).

Rugby and refereeing aside, this was a pleasant experience. The Wharfedale club is situated in the picturesque Yorkshire Dales and, despite operating on a limited playing budget, has maintained a presence in the third tier of English rugby for more than 20 years. The clubhouse is a warm and welcoming place and further entertainment is provided by their well-known and somewhat eccentric tannoy announcer.

Any hopes for a sun-bathed end to the season were dashed on arrival. A chilly, grey day and persistent drizzle were what we got and the Hartpury performance matched the conditions perfectly.

Winger Steph Reynolds was ruled out before the match and Hartpury lost flanker Dan Thomas and play-maker Gareth Thompson before 10 minutes had passed.

Wharfedale were also some way from full strength, fielding a pack that seemed to consist of at least five front row forwards and a line-out that, as a result, misfired on a regular basis.

The pattern of the game was set early on, as any signs of rugby from the visitors were halted by the Leahy whistle, and it was from a penalty kicked to touch that the Yorkshiremen opened the scoring.

A clever line-out saw a short, flat throw being popped back to hooker Ian Larkin who walked through a yawning gap in the Hartpury defence to touch down. The Wharfedale kicker, James Guy was unable to improve the score, as was generally the case with anything that was not directly in front.

A scrappy first half produced little in terms of rugby or excitement as, even on the rare occasions that Hartpury were allowed to play beyond two or three phases, they lacked their usual penetration in the wide areas and were undermined by handling errors.

With the referee ensuring that the game was largely played in the visiting half, it was no surprise when Wharfedale extended the lead on the half hour. A series of forward drives committed Hartpury defenders and blindside Jack Barnard galloped over untouched.

Leahy did shock the crowd with a penalty to Hartpury on the stroke of half time, Craig Jackson making no mistake from the tee to make it 10-3 at the break.

The second half was pretty much a continuation of the first. If anything, the penalty count seemed to accelerate against the visitors after the re-start and Tom Ailes received an almost inevitable yellow card in the 44th minute.

Two minutes later energetic Wharfedale flanker Dan Solomi took advantage when he dived over from the base of ruck, although another poorly struck conversion from Guy meant that Hartpury were still in touch.

Hartpury knew that it was ‘now or never’ and produced their best spell of the game. Phase after phase appeared to have the Wharfedale defence at breaking point but, admirably, they held out (main picture).

Against the run of play, it was the hosts who scored again in the 62nd minute. A Hartpury move broke down in midfield and Solomi was quick to take off down the slope. He was allowed to slip between two cover tacklers and was in under the posts. Guy even managed to add the kick. Game over.

The closing quarter saw Hartpury continuing to push, only concede turnovers or penalties at critical moments. Referee Leahy finally got on the scoresheet with three minutes to go, as he skipped under the posts to award a penalty try for a collapsed maul, minutes after ignoring similar offence at the other end.

So, a disappointing end to a generally fine season for Hartpury. Fifth place in National One is an excellent achievement and, with the prospect of retaining many of the current team for next season, there is plenty of hope for the future. 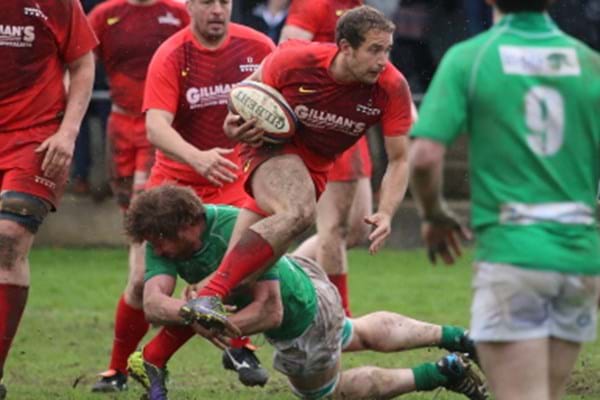