When Matt Aston first picked up a golf club, he dreamed of being the next Tiger Woods, not a big player behind the scenes, but life has a funny way of adding twists to your destiny.

It was love at first swing for Matt on that fateful day 12 years ago when his mum decided that a trip to the driving range would be more interesting for the seven-year-old than watching his brother play football. He picked up a club and was instantly hooked.

That passion quickly translated into a talent for the game; a talent that led Matt to Hartpury, where he was accepted on to the BTEC Level 3 Extended Diploma Performance and Excellence in golf – a programme that has nurtured many of the UK’s brightest young golf talents, including Jamie Dick and Tom Sloman, who both have world rankings.

Matt was part of the Hartpury team that clinched the British Schools and Colleges Tour title in 2014 and also starred in Gloucestershire’s South West Schools Championships success.

And now his love and talent for the game has opened the door to a dream career in the industry; as a trainee manager at the world-famous Celtic Manor Resort – home of the 2010 Ryder Cup and 15 Welsh Opens.

One of an astonishing 550 applicants for the role, Matt was one of only 23 young people who were invited to an interview day at the resort in Newport, despite the fact that the job advert had specified that university graduates only should apply. Matt was just finishing his college course at Hartpury.

As candidates were whittled down throughout the day, Matt found himself being grilled by six senior managers and, at the end of the eight-hour process, he was told he had got the job. And now, eight months into his new role, the determined young man is setting his sights on reaching for the sky in the hospitality industry.

“As a trainee manager, I spend about one to two months learning each aspect of the departments I go into. I will even be working in the kitchen as a chef throughout my programme," said Matt.

“It’s very challenging moving so quickly from one thing to another, especially when the departments are so diverse; from food and drink to accounts, golf, events, front desk and conferencing and banqueting. You’ve got to think on your feet all the time; no two minutes are ever the same, let alone two days.

“It’s full on, you’re always on call even when you’re not working but I love it. It’s such a great place to learn. My dream now is to become a director of golf one day, whether that’s at Celtic Manor or one of the other big courses. Who knows, I might even have time to play a bit more golf then!”

Matt certainly hasn’t been kept away from the coalface since starting at Celtic Manor; from working with the golf manager at the Welsh Open last September to playing a leading role in supporting the successful running of the high-profile NATO Summit in front of the world’s media in September, he’s certainly been expected to hit the ground running.

Thankfully, his experience of balancing the demands of competing at the top level in his sport with a full academic programme at Hartpury stood him in good stead for the challenge that lay in store.

Matt added: “I chose Hartpury as I knew students already there like Ryan Haskell, but to be honest, the main reason was because my brother had chosen to study golf at Filton, and it was always the way that if he picked blue, I’d pick red; and those were our college colours!

“It was the best decision I ever made though and I loved every moment of being there. I loved the fact that in the elite environment at Hartpury, I always had professionals like Richard King (golf programme manager) who kept me motivated on my goals and could always answer any question I had about my golf game.

“The programme also gave me skills and experience that are relevant to the job I’m in now. From studying and playing in an elite sport environment to gaining sports coaching experience and studying modules in sports business; everything I’m doing now in my job, I can link back to what I learned at Hartpury. It really helped me to understand the challenges and opportunities facing a business of this size. It was the best possible preparation for the career I’m now working towards.” 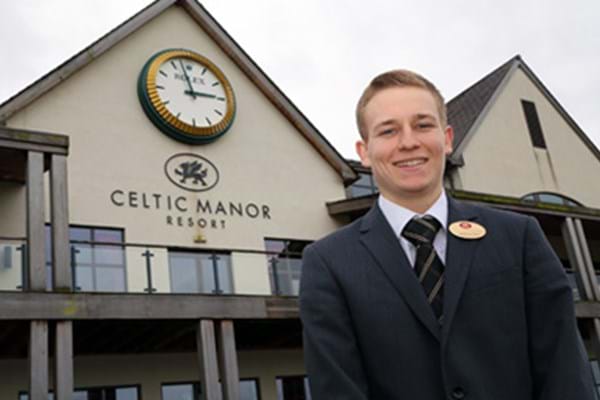